Just who is LaJuan Ramsey, and is he good?

Share All sharing options for: Just who is LaJuan Ramsey, and is he good? 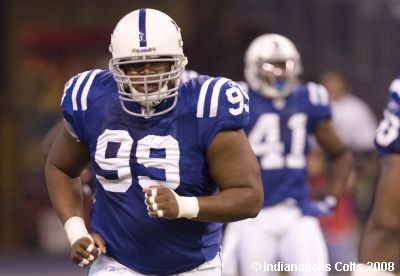 It has been a little tough to get any kind of legit scouting report on DT LaJuan Ramsey, Indy's replacement DT for Ed Johnson. Google searches actually take me to SB Nation's 49ers blog (Niners Nation) for the only tangible report on Ramsey. Here is the ESPN scouting report, via Fooch at NN:

So, those are Ramsey's positives. What is it that he sucks at?

Weaknesses: Ramsey doesn't have elite size and he is inconsistent. Doesn't have great bulk, plays too high and has problems splitting double teams. Doesn't always use hands well and needs to continue to work on ability to shed blocks. Plays out of control and gets caught out of position. Though has good range for size doesn't give the same effort on every snap and isn't relentless in pursuit. Missed two games with a shoulder injury in 2003, underwent hernia surgery during the 2004 off-season and missed two games with an ankle injury in 2005.

Now, much of this information is general, and some of the negatives don't strike me as too bad. The inconsistency is a problem, but the gist of it all is Ramsey is a big, athletic guy who moves well but is lacking in technique. John Teerlick is as good as it gets when it comes to teaching d-line technique. So, Ramsey has a good teacher.

The best scouting report on Ramsey that I read comes from a message board. Granted, I take message boards with a big grain of salt about the size of the state of Rhode Island. But, this report was very detailed, and worth sharing:

LaJuan Ramsey actually outperformed Brenson Bunkley during their rookie year [in Philadelphia]. For whatever reason Ramsey didn't receive playing time over the second half of the season. With the way he played early during his rookie year I was excited to see LaJuan play but once I saw him play I became critical. He's big but he's lazy. He does two things you never want your lineman to do he doesn't use his hands and he stops his feet once he's engaged. I always doubt that you can change a guy's demeanor when they reach the NFL I hope a light flashes on for him. He has the attributes to be good, but not the demeanor.

This is his scouting report from the scouts notebook:

Very quick off the ball. 3-technique DT. Can be very disruptive. Will pursue. Really hustles. Reminds you of a Paul Grasmanis type DT. Doesn’t play strong. More of a speed/quickness guy. Uses his hands to battle OL. Fights to get off blocks. Excellent motor. Good awareness. Sees the ball and gets to it. Almost made an impressive play in the Rose Bowl. Shot off the ball. Stayed pretty low and got under the OL. Got into the backfield and got his arms on the RB, but could not bring him down. Great effort on the play. Could have made the tackle if he’d been able to square up on the RB. Instead, he hit him from the side.

Summary: Has a legitimate shot to make the team if he is active and disruptive in Training Camp. Never was able to break out in college, but could be a solid backup DT in the NFL.

So, it seems work ethic and technique are LaJuan's achilles heels. This opportunity now is his best chance to latch on to an NFL team and make a difference. As the second report says, he is ideal to play DT in a Tampa 2 scheme. Can he play NT though? We shall see.