Just who is Daniel Muir, and is he good?

Share All sharing options for: Just who is Daniel Muir, and is he good? 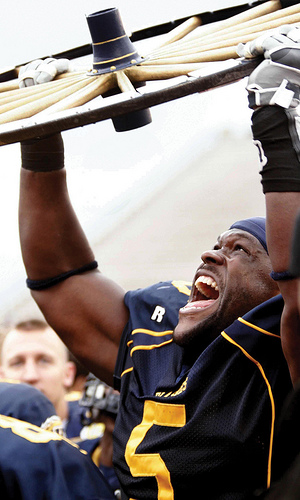 We talked about LaJuan Ramsey. Now, we focus on Daniel Muir. To be honest, there is less out there about Muir than there is for Ramsey. For the Green Bay Packers, it was believed Muir would step in and help the d-line in the wake of Corey Williams getting traded to Cleveland; a decision that now looks disastrous as the Packers are almost as bad at stopping the run as Indy is. Green Bay cut Muir at the end of pre-season because he was hurt. In GB's system, Muir was a 300 pound DE, and played 4 games for them last year, generating 4 tackles.

What we do know about Muir is superficial. He is 6'2, 312 pounds; ideally built physically to play NT in Tampa 2. He is young (25) and played his collegiate ball at Kent State. At Kent State, he was named to the All MAC team, and helped anchor a pretty solid defense. Walters Football named him as the 19th best DT prospect in the 2007 draft, ahead of Penn State's Ed Johnson, who was 29th on their list. Our friend at New Era Scouting, Luke Paul Chandler, likes Muir and thinks he can fit in well in Indy' system (tip to shake n bake).

It is important to note that Packers fans, as recently as August, really thought highly of Muir. His injury might have come at a bad time, and cutting him might have been a necessity roster-wise than a comment on his playing ability.

So, a lot of nice things, but very little substance. The key with Muir and Ramsey is geting them comfortable in the DT rotation. Muir looks like he is the one Bill Polian and Tony Dungy want to start at NT, with Ramsey as depth. Eric Foster, Keyunta Dawson, and Raheem Brock will rotate the other DT spot, with Brock also seeing time at DE. Once this rotation gets locked down (and hopefully no one else gets friggin hurt), the run defense will improve.

Also, quick factoid: Daniel Muir played on the same d-line in college as Colin "DT not Irish drunkard" Ferrell. Ferrell had a very impressive camp and pre-season this year with the Colts. Dungy often praised him. It says something that Muir was signed and Ferrell was cut after pre-season. Ferrell has yet to sign with any team.