Eli Manning's 3 pick, 1 TD, sub 200 yard performance and 4 players on bye or injured brought down the last undefeated in either Stampede Blue league, Matic's Pat Beach 4 President fell to DoTheMathis98's 48 layers of Kevlar. Matic still keeps his lead on the Demond division, I (The Inflamed Bursa Sacs) held my lead in the (Bob) division and DoTheMathis98 moves into the lead of the Sanders division. In the previous update, someone pointed out that DoTheMathis was trailing in his division despite scoring significantly more points. Now all three divisions are led by the team with the most points scored. Like in real football, their is no such thing as clutch in fantasy. 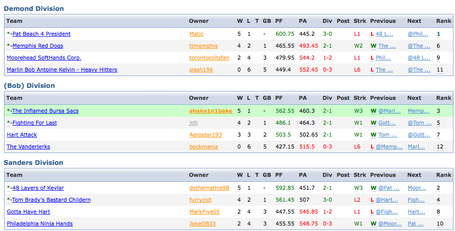 On the interesting side. jdb's Fighting for Last is 4-2 and holding a playoff spot despite starting the same lineup every week so far and jdb apparently not having logged in since the draft. A bold strategy that appears to be working for him.

Next week features the "Saving Face Showdown" as the Slash196's team faces the other winless team beckmania's The Vanderjerks. Only one team will remain in the leagues cellar.

Good luck to all (but less to ttmemphis).