The McFallout from the McCargo Trade

Share All sharing options for: The McFallout from the McCargo Trade

OK, I must now admit that many of you were right: There are some eerie similarities between events happening to the Colts this season and events that happened in 2006.

Yes, I now agree. It is eerie.

In all honesty, I did not expect the Colts to make a trade for a DT, let alone someone like John McCargo. As a community, we must bow before the grand, infinite wisdom of furrycolt, who made the strong suggestion some time ago that Indy should pursue McCargo because he was languishing on Buffalo's bench (see comments in link). Now that McCargo is a Colt, what is the roster fallout and what should we expect?

Well, for starters, adding McCargo serves notice to the rest of the AFC. Oh sure, it is not an ESPN headline grabber. Morons like Roy Williams and Pacman Jones are good for that. This trade got the attention of the football experts, the people who know what it takes to win in this league. It told them that the Colts are not simply going to lay down and die because their starting DTs entering the season quit on football. Bill Polian runs this organization.

We will do a breakdown on McCargo's strengths and weaknesses later today, and bring in BrianG at Buffalo Rumblings to give us some insight into why his team traded their first round pick in 2006 for a fourth round pick next year. For now, we talk roster.

Trading for McCargo meant the end of LaJuan Ramsey as a Colt. Ramsey was cut last night. Indy's NTs are now McCargo and Daniel Muir. We haven't seen Muir play yet, but Polian speaks well of his ability to stop the run in a Cover 2 scheme. If Muir is healthy (he hurt himself the first practice with the Colts back in early September), the Colts can get back to doing what they planned all throughout mini-camps and training camp: Use Raheem Brock as a DE on running downs, and as a DT on passing downs.

This is a big deal because Indy was worried that Brock at DT all season would wear him down, and prior to the McCargo trade, Brock was the best DT (talent-wise) the Colts had on the roster. Now, Tony Dungy can start solidifying his line rotation, with packages that might feature Muir and McCargo together with Freeney and Brock on the ends; or, a pass rush line with Freeney, McCargo, Brock, and Mathis. Throw Eric Foster and Keyunta Dawson into the mix, and the Colts finally have a d-line that looks like it can actually do something. If teams like Jacksonville want to go 2 TE and pound the football at Indy, then Dungy counters with Muir and McCargo. If teams are dumb enough to try and spread Indy out and throw, go small and rush the passer.

McCargo (and again, we will evaluate his talent and worth a bit later) allows Dungy to match his line personnel to attack the opponent, not simply hold their own against them.

It is also important to note that this trade has occurred around the same time that SAM backer Tyjuan Hagler has returned from the PUP. Bob Sanders is also slated to practice this week. This means that the Colts will get, essentially, three new players at DT, SAM, and SS. All three of those positions are critical in a Tampa 2 when it comes to... drumroll please... stopping the run.

The moron media machine will often shout that Bob Sanders is the Colts run defense. Listen, I love Bob. We all love Bob. Bob is the best safety this league has ever seen since Ronnie Lott. But, we all know that Ed Johnson, Rob Morris, and Booger McFarland were all very important to Indy's defense  emerging as a top tier defense in late 2006 and all of 2007. It is no coincidence that these players, Johnson (DT), Morris (SAM), and McFarland (DT), missing from the roster have hurt Indy's ability to stop the run. Now, they have been replaced by worthy players, talent-wise. This, combined with Bob's return, is the "serving notice" I was referring to.

The Colts are going to stop the run and make you throw, and if you throw against the Colts, you are going to turn the football over. 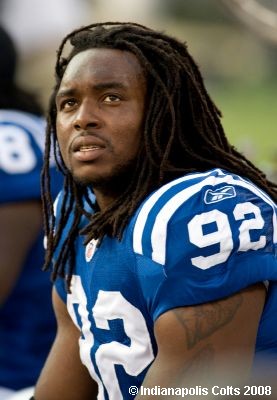 What about Marcus Howard?
Photo: Colts.com

The other wild card in this equation is how Indy will use someone like Marcus Howard going forward. Remember, Dwight Freeney (who was the #7 overall pick in 2002) did not start playing lots of snaps for Indy until mid-October 2002. Dungy held him out to keep him fresh for November and December, and it paid off. Freeney was a beast, and without him Indy would not have been a playoff team that year. The Colts might have a similar strategy for Howard. Remember, this kid from Georgia is only  6'2, 245 pounds. He is also a rookie, and rookies always have a tendency to hit a wall after about two months of NFL play. They just aren't used to the long season. Dungy might be holding Howard out to keep him (and Freeney) fresh for the second half. Last year, from Weeks 1-9, the Colts defense was arguably the best in football. When Freeney went down, the pass rush went with him, and the defense suffered mightily. This year, the Colts seem to have learned their lesson. They are using Freeney only on third down in some games, keeping him fresh throughout. We may start to see Marcus Howard used in this way. Stay tuned.

So, the bottom line here is the Colts now finally have replaced Ed Johnson and Quinn Pitcock. They are getting healthy, with Hagler and Sanders returning soon. In many ways, the season starts now for Indy. They seem (and I stress seem one more time) to have weathered the early season storm and emerged with a 3-2 record. They swung a deal to solidify their d-line both for now and, potentially, for the future. They also are gaining confidence in players like Tim Jennings, Dante Hughes, and Melvin Bullitt. What we should expect to see is the kind of Colts defense we saw in late 2006, early 2007. Combine that with a healthy Colts offense and a much improved special teams unit... notice served.