McCargo: So, is he any good?

Share All sharing options for: McCargo: So, is he any good?

We wrap up our post-McCargo trade analysis with a look at the player himself, asking the simple but all important question: Is this dude any good?

Before we get into scouting report breakdowns and other perceptions, flash back with me to 2006. Back then, I made fun of Marv Levy, then-GM of the Buffalo Bills, for trading back into the first round to get John McCargo out of NC State; a player that most draft experts thought was a 3rd rounder. You'll have to forgive me. Back then, I did not know as much about the draft (and all the misinformed nitwits that surround it) to have even a slightly informed opinion. Back then, I was the nitwit taking shots at Marv Levy. However, shortly after the draft, I remember listening to Bill Polian on the radio talking about Levy trading to get McCargo. He said it was a smart move because many teams (presumably teams that run Cover 2) had targeted McCargo, and if one wanted to get him before the late first, early second round, one needed to make a trade.

Flashback even further and recall that Bill Polian, at one point, used to work for Marv Levy. Then, at another point, Marv worked for Bill. This two guys go way, way back and have a similar eye for talent. They built the great Buffalo teams of the early 1990s together, and Polian went on to work his magic in Carolina and Indianapolis. Today, much of the success Buffalo is enjoying is a result of Levy's work on draft day. Key players like S Donte Whitner, RB Marshawn Lynch, LB Paul Posluszny, QB Trent Edwards, CB Ashton Youboty, S Ko Simpson, and DT Kyle Williams were all drafted by Levy in his short tenure as Bills GM. These players form the corps of the current 4-1 Buffalo Bills.

So, what do these great personnel geniuses see in McCargo that the current regime in Buffalo doesn't? More on the flip...

Well, the reason McCargo did not work out in Buffalo varies from person to person. Bills fans who read and comment at Buffalo Rumblings say one thing pretty consistently. Brian Galliford, the head writer at BR, says something a bit different:

As far as McCargo goes – all the talent in the world, but he sort of gave up after the Bills went out of their way to get Marcus Stroud and Spencer Johnson this past off-season. Came into camp overweight and wasn’t working to get his job back. He wasn’t going to do anything in Buffalo; perhaps a change of scenery will change the equation.

Then, if you go to former NFL GM Mike Lombardi, he takes a shot at McCargo's talent:

Both teams [Buffalo and Indy] play a similar style in that they are a gap control team.  And McCargo was one of those players that was always on the ground and lacked balance to keep his feet.  He was not very effective and he at least will give the depleted Colts defensive tackle group a bigger body.

So, with McCargo's early two year career, there is a mixed bag of reviews out there. But despite what 2006 draft nitwits (like me) said about McCargo, the fact of the matter is he was graded quite high on many draft boards. As shake n bake pointed out yesterday, McCargo was ranked the third best DT coming out of the 2006 draft by NFLDraftScout.com. And if you read several of McCargo's pre-draft scouting reports, they do not read like someone who is considered a 3rd or 4th round pick. What you see is a prototypical Tampa 2 DT:

Explosive run-defending tackle who flashes power. Plays with excellent pad level, wedges between blocks and is rarely off his feet. Possesses tremendous first-step quickness, makes plays out to the flanks and has a closing burst of speed.

He is a big, strong defensive tackle with very good natural athletic ability, which combines with his snap anticipation, competitiveness and instincts to make him an impact defensive tackle who consistently disrupts plays before they get started.

In much of the pre-draft stuff I've read, you see nothing of the type of player Bills fans describe as "lazy" or "disinterested." The only character weakness suggested is the one in the CBS Sportsline report:

He loses his focus/concentration at times, and when he does, he pops straight upright at the snap, loses leverage and cannot get free from blocks to make plays. When he plays up high, he can be driven off the ball on runs at him.

The CBS goes on to say that McCargo has toughness, plays alert, and understands the game of football. So, it is a bit contradictory when you read the entire report, a lot like the things I'm reading on McCargo in general.

If one reads through the lines, we see that this is a very talented kid who has the body and intelligence to play Tampa 2-style DT. But, since Buffalo drafted McCargo to play DT in a Tampa 2 scheme, and since he has all this tremendous talent, that still doesn't answer the question of Why didn't it work out? Relax. I have a theory.

Maybe the problem with McCargo in Buffalo was even though he was playing DT in their Tampa 2 scheme, he was not playing his natural position at DT. Buffalo drafted McCargo to be a three technique, or over tackle, DT. The guys on the Colts roster who play that spot are Raheem Brock, Keyunta Dawson, and Eric Foster. Warren Sapp made his career playing three tech DT, and John Randle was probably the best three tech DT ever. This is the DT who knifes through the gap and hits the ball carrier in the backfield. This is NOT the position played by Corey Simon, Booger McFarland, and Ed Johnson the last three years in Indy. They played nose tackle, or under tackle. Their job is to line up over the center and guard, not in the gap between them. They attack the blockers, not try to get by them.

To get all poetic on you and crap, they are the rock and the others players are the water that slashes up against them. Deep stuff, I know. I have a haiku book out this January. 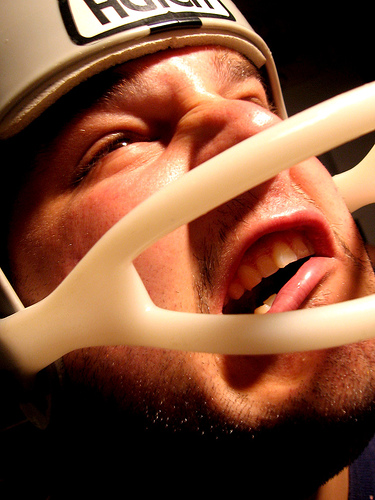 Perhaps what McCargo needs in order to reach his talent potential is 1) A change of scenery, and 2) A position change from three tech DT to nose tackle. McCargo (6'2, 307 pounds) is certainly big enough to play the position. He knows the stunts and blocking angles for a gap control d-line. And since he is known as a very good run-stuffing DT coming out of college, perhaps NT is where he should be.

Of course, NT is not the most glamorous position on any defense, as the IndyStar's PhilB reminds us:

If you want me to accentuate the positive, perhaps he fits better into the Colts' system, which wants faster guys. The Colts will want him to take on the center and guard, so that the other tackle can penetrate a gap and apply pressure to the backfield. It's not a glamorous job -- remember how Ellis Johnson balked at playing it when coach Tony Dungy arrived -- but if McCargo can get it together in this second chance, perhaps he will be of some benefit.

I do remember how Ellis Johnson balked at playing NT in a Cover 2. Ellis was out of the league shortly after his balking. Take heed, John McCargo. When Tony Dugy says Do this! you better do it. If not, you might be selling insurance the next day.

Perhaps playing NT is where McCargo belongs. Bill Polian obviously thinks he can do the job. Remember, Polian does not like to part with draft picks. If he trades a draft pick for a player, ANY player, then that player has to have something special. In the next few weeks, we will see what McJohn will bring to the table. He is certainly more talented than Ed Johnson and Quinn Pitcock. It remains to be seen what he will do with that talent. We will follow it closely.