I've been a bit rough with AOL Fanhouse of late, mainly because they are supposed to be a fan blog written by sports fans. Hence, the name "Fanhouse." But if you read their daily entries, the writers do more complaining about the sport than cheering for it. I never get the sense that their writers actually like the NFL. Most write entries as if they are annoyed at the work. Again, that is just my little ole impression.

The exception to the norm at Fanhouse is Stephanie Stradley, and she is one of the reasons I check it daily.

Steph is one of my favorite writers at Fanhouse because she is a complete and unapologetic fan. She not only writes about her beloved Texans at Fanhouse, but also at a blog at the Houston Chronicle, where some of her best work gets published. Steph was kind enough to not slam the door in my face (and she'd be entitled to after all the negative stuff I've said about Fanhouse) and answer a few questions about the Texans. I posed the same queries to Tim at BRB, but he is busy mulling your questions. His answers will get posted soon. For now, here are five good ones with Steph, Texans Girl Woman Extraordinaire:

BBS: Our teams have had some rotten luck of late. With the Colts, it is injuries. With the Texans, it is hurricanes. What has it been like post-Ike? I know Tim didn't have power for days afterward. How have Texans fans (and Texas folks in general) picked up the pieces after Ike?

Steph: I think nationally people don't realize how badly Houston and the surrounding area was hit by the hurricane. Ike was a huge hurricane with a large wind field and huge storm surge, so everybody got affected by the storm. There are still huge numbers of people without power and without places to live.  Our social safety net in town was already strained in helping those hurt by Hurricane's Katrina and Rita, and with the economy struggling like it is, it is a particularly bad time for people to be missing paychecks because a lot of businesses were destroyed or didn't have power.  If people want to help out, please consider donating to this fund that will help local efforts: http://www.houstontexans.com/community/TexanshelpingTexans.asp.

BBS: Last season, it seemed the Texans turned a corner with their defense. Mario Williams is arguably the best DE in football, and Demeco "Not Demarco" Ryans is a demon on earth at LBer. This year, the defense has been shredded. What happened?

Steph: The Texans defense has a few individually good players, but I believe the biggest problem is defensive coordinator Richard Smith.  He has never been a solo coordinator before and doesn't have a background in building a defense from scratch.  Since Gary Kubiak has been on board, the offense has improved but the defense was ranked near the bottom in just about any meaningful defensive category.

BBS: Matt Schaub's tenure in Houston has been shaky. It started with promise, but prior to last week people were calling for his benching in favor of Sage Rosenfels. What do you two think of Schaub's play?

Steph: It's not like Schaub is in a system where the defense is awesome, the line is awesome and the running game is totally on track where you know that it is quarterback play holding them back.  So I think the people calling for him to be benched after game 2 were silly peoples.  I think that any quarterback is going to struggle when an offensive line is going to a new zone blocking system and has three new players, including a rookie left tackle.  I also think that Schaub also had no favors facing tough defenses on the road and with his receivers not catching passes.  I am actually still fairly optimistic about him.  He had a 119 QB rating last week, even without Andre Johnson playing a big role in the game or the running game being anything special. 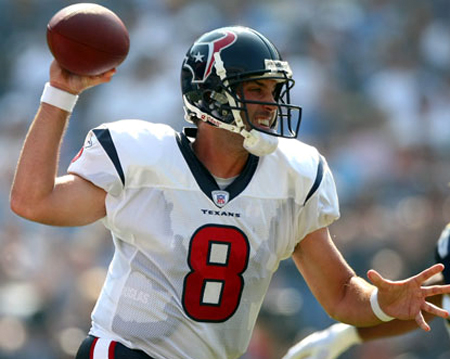 QB Matt Schaub is a good player, but he has been inconsistent for the Texans.

BBS: Tim told me last April that Steve Slaton was going to be a real player in this league. Bill Polian recently said Slaton is as good, if not better, than Chris Johnson in Tennessee. How has Slaton looked, and is he your team's primary RB now and for the future?

Steph: Slaton has looked great. Even when the line hasn't done him many favors, he has busted through tackles and made plays where there really were none.  The TD pass he had last week was one that few RBs could do.  Even so, the offensive line and Slaton have to reduce the amount of run stuffs they are getting. And I think that both will look better with more time in the system and playing at home.  Kubiak's offense is all about avoiding long yardage situations and keeping defenses off balance.  He really isn't going to want to put a relatively finesse line in a position where they are in obvious passing situations.  I think they need a complementary back with Slaton because he runs so hard you are afraid of his durability.

BBS: And finally, this is a big game for both teams. The loser is in a big, BIG hole in the AFC South. What do the Texans need to do to beat the Colts Sunday?

Steph: I have no confidence in the Texans defense to do anything against the Colts offense.  They have made very average quarterbacks look like great decision makers. The defense plays hard, but they don't always play smart, and their defensive schemes are easy to read.  The Texans best hope is the way they beat the Colts their one and only time: by the offense keeping the game close and Peyton Manning on the bench.  There is always the possibility that the pass rush could get to Manning--the Texans have had a number of multi-sack games against the Colts over the years and generally play better at home.

Many, many thanks thanks to Stephanie for taking the time to answers my questions. Again, Steph is one of the better fan bloggers out there, and her stuff is regularly read by me and other SB Nation bloggers. Why? Because she writes like someone who loves her sport and team.