A pretty quiet week for the Shakedown League. No changes to the top 6. Only one game decided by a single digit margin, a 99.15-91.55 win for me in a epic showdown that came down to the MNF game and featured both teams maxing out their possible scoring for the week. Congrats to ttmemphis on a hard fought matchup. 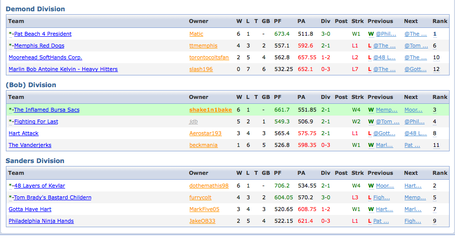 Markfive05's Gotta Have Hart rode Sammy Morris to victory over Aerostar153's Hart Attack in the battle of the Mike Hart inspired team names.

In the saving face showdown, slash196 was burned by Favre and Marvin's no-shows and fell to beckmania's The Vanderjerks, leaving the league with only one winless team.

jdb's Fighting for Last solidified it's playoff chances win another win. Moving him to 5-2 with a two game lead protecting his playoff spot, despite the continued lack of any roster or lineup adjustments since the draft.

Good luck to all (but less to torontocoltsfan) next week.