Soon, we Colts fans won't have Vince Young to kick around anymore

Share All sharing options for: Soon, we Colts fans won't have Vince Young to kick around anymore 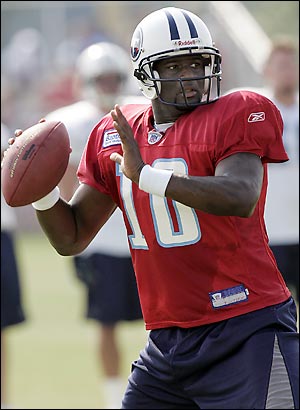 I think the Colts are better than the Titans. I know. Logically, that makes no sense. If a Titans fan said the same thing and his team was 3-3 and mine 6-0, I'd probably laugh at him. Maybe even give him the Michael David Smith treatment. But, unlike years past, what has defined the first half of the Colts 2008 season is injuries. Now that the Colts are healing up, I personally think their talent, combined with their leadership and savvy, will overcome the Titans. Hell, injuries have defined EVERYONE'S 2008 season, including the Titans. The best thing to happen to the the Titans since they hired Jeff Fisher was an injury this season... to their starting QB, no less.

I've held off taking shots at QB Vince Young all week because it is so obvious that his career with the Titans is over. While other teams have moaned about their injuries, the Titans are practically jumping for joy that they had their starting QB get hurt in Week One. Now, there is next to zero chance Vince Young will ever play as the Titans starting QB again, and for good reason.

He sucks, as we at Stampede Blue have long maintained.

Kerry Collins has stepped in and led Tennessee to their first 6-0 start in franchise history. He is now their unquestioned starting QB. Jeff Fisher would have to pull of his mask and reveal he is Wade Phillips for there to be any shot a Collins getting benched in favor of Vince Young. Collins has earned the right to start for the remainder of the season, no matter what condition Vince Young is in mentally or physically. And then, there is Collins after this season. They will have to re-sign him (he is a free agent at the end of 2008) and Kerry will ask for starting QB-caliber money. Kerry isn't dumb. This means that Vince young, the #3 overall pick in the 2006 NFL, is now a permanent back-up.

A $58 million dollar back-up who has pocketed $28 million in guaranteed money.

Now, the overall opinion of several Titans fans is that Collins is "keeping the seat warm" for Vince. Ole Vince has had a few weeks to get his head screwed on straight, get healthy, and he will get in there during the stretch run for the playoffs.

Collins is the Titans starter from here on out. No ifs, and, or butts. The only way Vince will see the field is if Collins is injured, and an injury to Collins is the death knell to Tennessee's 2008 season. Unlike Kerry Collins, Vince Young cannot throw the ball accurately. He is a whiner and pouts on the sideline when he doesn't get his way. Veteran leaders on his own team accused him of quitting on them. He has violated team rules, gotten into fights with teammates, and (to put it mildly) played a lot of bad, BAD football this season (both in pre-season and limited regular season action) because he doesn't know the offense.

Again, this is all pretty much universal knowledge now in league and fan circles. The reason no one is really talking about the fact that the Titans $58 million dollar QB is picking his nose on the sideline is because they are winning.

Perhaps one of the reasons the Titans are playing with such urgency this season is because they might realize they need to win it all now. Why? Well, this coming off-season things are going to get dicey for the Titans. They need to dump Vince Young and his $58 million dollar cap ball and chain. They cannot franchise DT Albert Hayneswoth again. They will either make him the highest paid defensive player in football (which is what ole Fatty will demand) or see him (and their future hopes at winning anything) walk away. And then there is Collins, a 35-year-old journey man who has won over the locker room and the fans. They will need to pay him too.

One has to give head coach Jeff Fisher a ton of credit for keeping this powder (blue) keg of a team together and focused. Along with the Vince Young fiasco, two weeks ago in a game against the Ravens, team captain Keith Bullock got into a fight with teammate Cortland Finnegan. The fight raged on the sidelines and continued on throughout the game. Again, no one really made a big deal out of it because the Titans are winning. It will be interesting to see how this team responds to a loss, or a series of loses. The Titans have always been a cocky bunch, short on smarts and long on ego. All of their antics this week may well bite them in the ass both in the short and long term. Real winners do not need the kind of silly motivation we are seeing from the Tacs.

Back to Vince, it will be interesting to see what happens to him. He is still a very talented player, but he seems to lack the mental toughness to play professional football. If there was ever an indictment as to the quality of play in the collegiate football ranks, it is Vince Young. He dominated college football, and often won games seemingly all by himself. He comes to the pros, gets treated like royalty, has excuse after excuse made for him, and then bombs out. Some suggest he may suffer from mental depression. Depression is an illness, and if Vince does have such a problem he needs to step away from the game and get help. One's mental health, or health in general, is far more important than this silly game we love to watch and play.

Regardless of his mental health, it is clear his tenure in Tennessee is over, and with it comes an end to a period for us Colts fans. For years, we have enjoyed making fun of Vince and his cult of rabid fans. They made excuse after excuse for him, and while it often bordered on the absurd, it always fell in the realm of sheer comedy. But, like all good things, it seems Vince's time in Tac Town is up, and we Colts fans won't have Vince Young to kick around anymore in Tennessee.