The only thing consistent about this team is its inconsistency. It seems for every area they get fixed another area (usually pretty reliable) gets broken. Though, strangely, I come out of this lose with a renewed sense of optimism about the team. Yes, they are 3-4 and that is never good, but the positive is that most of the AFC is 3-4, and the teams that are 4-3 or 5-2 are very beatable. As shake n bake said:

The Colts are one game back from the AFC Wildcard and they have a head to head tiebreaker over one team ahead of them (Ravens). All the Colts have to do is gain one game on the Ravens and Jets over their remaining 9.

Contrary to popular belief, and the silly narrative that is getting written, the Colts still have a viable chance to win their division. Nine weeks of football leave a lot of room to makeup ground. But, last night, the Colts were not able to take advantage of an anemic Titans offense, which was completely shut down by a Colts defense that was supposed to "not be very good."

Before I get to the observations, I gotta say that I really hate being right. For years, we've said Vince Young is garbage and the Titans would be much better with Kerry Collins at QB. Titans fans railed against this. One even called me a racist for suggesting Vince get benched for Collins (his comment was deleted). Now, with Collins as their starting QB, they are 7-0 and in the driver's seat. Last night, Collins' steady play was a big factor in them winning. If Vince Young had started last night's game, Indy would have destroyed them. Gotta say again, Man! I hate being right. 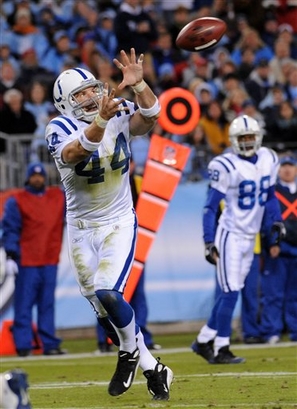 So, without Bob Sanders, Joseph Addai, Ryan Lilja, and Kelvin Hayden, the Colts went toe-to-toe with, supposedly, the best team in the NFL and nearly beat them. For whatever reason, the Colts just haven't played consistent football. Certain areas have been corrected, and that is very encouraging. But, the main focus now is getting Bob back and eliminating these annoying and game-killing turnovers.

I'll say again, as with all pre-scripted nonsense about the NFL, the AFC South is not "locked up." Just because a bunch of dumb-asses say it doesn't make it true. The Titans could very well lose 3 or 4 in a row, and the Colts could win 3 or 4 in a row. And then, they are back in it. The main thing I took from last night was the Titans do not scare me. Their main offensive weapon (Chris Johnson) was smacked around hard most of the game. If he wasn't fumbling, he had alligator arms out of the backfield. LenDale White was held to 13 yards on 10 carries. The Colts also moved the ball wells against the #1 defense, and ran for 4.3 a carry. All this was done without Bob Sanders, Joseph Addai, Kelvin Hayden, and Ryan Lilja.

And all four of those guys are expected back soon. Bob especially. Though the team is 3-4, keep the faith Colts fans. As ColtsFanNChiTown wrote in the FanShot, Tony Dungy has started 3-4 before and coached his team to great things despite that start. We will still get there.