Know Your Colts History: The All Name Team

Share All sharing options for: Know Your Colts History: The All Name Team 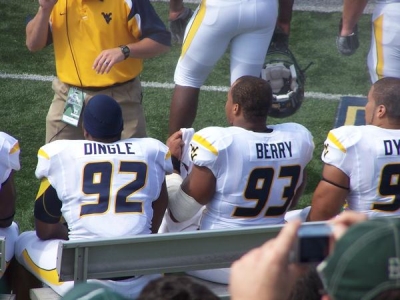 In life there are people who have been blessed with great names, but sports are the only place where you can become more well liked because your name sounds cool.  Admit it, there are players you root for just because you like their name rolls off your tounge.  You know this conversation has happened at least once in your life:

You: Oh, James Thrash just made that catch!  I love that guy!

You: To be honest, I'm not really sure.

Your friend: Is it because of his receiving skills?

You: Uh, not really.

Your friend: Is it because you like the Redskins?

You: Yeah, definitely not.

Your friend: Is it because you're in to thrash music?

Your friend: Do you just like him because a guy with the last name of Thrash sounds cool?

With that in mind, here are the best named Colts players (from Indy & Baltimore) at each position together with some random commentary which may or may not be factual.

RB - Roger Murdock Karim Abdul-Jabbar: Perhaps the only thing less successful than his 1 carry for -2 yards stint in Indy was his original name, Shannon Shah.  At least we have great memories from his appearance on Airplane:

FB - Luuuuuuke Lawton: It might sound like a plain Jane kind of name, but it soundsed soooooo much better when 60,000 strong shouted it out.

WR - Matt Bouza: Like Luuuuuuuke Lawton, Matt Bouuuuuuuuuuuuza is another great crowd name.  However, it's probably not a name that you want to attach to a business.  Would you buy tools from Bouza Hardware?  Would you get your car fixed at Bouza Automotive?  Would you even consider eating at Bouza Steak & Shrimp?  Doubt it.

TE - Pat Beach: According to his Wikipedia page, he owns a dive shop.  So there's a very good chance it's named Beach Dive Shop.  The only thing that would be more bizarre than this is if Albert Bentley owned a luxury car dealership.

OL - Forrest Blue: This is what happens when your parents work at a Crayola factory.

DL - Booger McFarland: You know with a nickname like Booger, there has to be some bizarre, childhood story attached to it.  While I'm intrigued to find out what the story is, I get the feeling that it's something I'd regret knowing once I found out.

LB - Buzz Nutter: In fairness, like Booger McFarland, Buzz isn't Nutter's actual first name, so we can't put this one on his parents.  But if you were Buzz, wouldn't you be doing all you could to keep people from calling you calling you Buzz?  Buzz Nutter sounds like some bad tasting energy cookie.

K - Dean Biasucci: Biasucci is such a great last name that I'm considering changing my last name to it.  Jake Biasucci has a nice ring to it.  Better yet, people could call me "The Sooch."  I could get used to a nickname like that.  It sure beats Buzz Nutter.

P -  Rohn Stark: It's a shame he ended up being a punter.  With a name like Rohn Stark, I bet he could've been an awesome Finnish rock star.

Special Mention - Joe Don Looney:  Note to all you future parents out there: Don't give your child two first names and an adjective for a name.  It's not fair to your chirld, and it's not fair to society.