Dominic Rhodes has run pretty well while Addai was out for the last three weeks. First off all that's great. A tandem of Dom and Addai powered the Colts running game to a superbowl. The last three weeks showed that none of the Raiders suckitude rubbed off on Dom, and he can still be a useful back.

Dom's success has given some Colts fans frustrated with the offense the idea the Addai was part of the problem, and that the Colts are better off with Dom. The most commonly cited support is that Dom has averaged 3.6 yards per carry to Addai's 3.5 and that Dom has outsushed Addai despite being the featured back for one less game. The problem with these reasons are the flaws of YPC, running behind different O lines and the effect of running fresh.

We'll start with YPC, yards per carry is the stat for quickly determing RB effectiveness. The key word there is quickly. YPC gives a quick look at a how well a guy is running, but when is the fast way ever perfect? Yards per carry has two big flaws. It overvalues backs that "boom and bust", guys that break off the highlight reel runs, but more often than not are stopped for little gain. Boom and bust backs are inferior to consistant runners because they kill drives. Normally I would make up an extreme example to show this, but here are actual run lengths from Rhodes.

Dom's busts left the Colts offense in a bunch of difficult situations. 2nd-longs and especially 3rd and longs kill drives.

The other problem with yards per carry is that not all yards are created equal. Would you rather have a yard a 4th and inches or 10 yards on 3rd and 15? Yards per carry says the second option isn't just better, it's 10 times better. Edge James averaged 4.2 a carry for the Colts, he fininished in the top 10 in YPC just once in 7 seasons in Indy. does that mean he wasn't an elite back? NO, because when Edge James averaged 4 yards a carry it was "4 yards every carry"

This is where I love FO's success rate. It's the anti-YPC. It doesn't care about anything other than helping to move the chains. It's based on gaining a large enough percent of the yards to go for a new set of downs, so as to put the offense in a good situation. Here are the requirements for a "success"

This year Addai is currently 10th in success rate. Dom? a full 10% lower for a rank of 28th. Addai's running has been especially unsexy this year with a long of 15 yards, but he's still been turning out productive run after productive run. 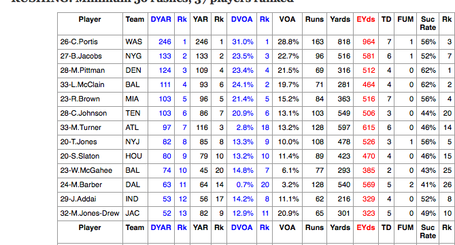 The other factor throwing off yards per attempt is the four games where Dom came in off the bench with fresh legs. He averaged 4.4 per carry off the bench. In the games where he was the featured back he had the same YPC as Addai, 3.48.

So we've seen why the YPC doesn't tell the story of Dom vs Addai, their production actually hasn't been that similar. Now we'll see not only has Addai outperformed Dom, he did it under harder circumstances.

Both backs have faced an above average schedule of run Ds. DVOA says Doms schedule was a bit harder, yards per game allowed says Addai's schedule by a little. The big difference wasn't who they were running against, it was who they were running behind. All three of Dom's games he had Jeff Saturday (who came back very early from a knee injury). Addai got two games without Saturday and two with him fresh back while he was still recovering. Addai got only one game running behind starting guard and 2nd round pick Mike Pollak, to Dom's 3. Addai ran against two top run D's behind 3 first time starters on the interior. Dom got the benefit of having two of the interior starters back for all three of his games.

Addai was as good as Dom or better while running against these guys... 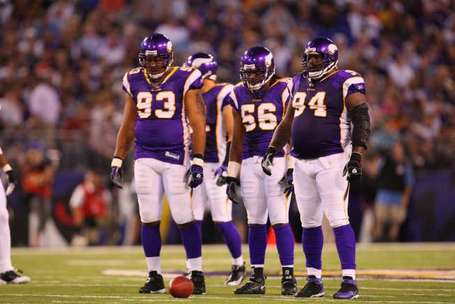 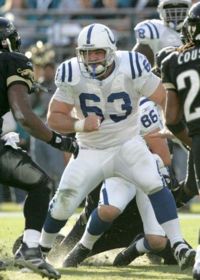 Addai is clearly the better back. Dom has definately earned himself some carries, especially since Addai struggles to stay healthy, but a running game based around Dom is going to cause an offense to sputter and stall.