Dungy the coach most NFL players want to play for

Share All sharing options for: Dungy the coach most NFL players want to play for

This past Sunday, The NY Times reported on the results of a poll conducted, to answer the question, "What do NFL players really think about the coaches for whom they play and the franchises for which they work?"

Last season, the N.F.L. players union commissioned the Wharton Sports Business Initiative at the University of Pennsylvania to conduct an unprecedented survey of players. It was the first time players had been asked about issues related to their coaches. The survey asked players to name names, and the players overwhelmingly obliged.

Asked which active N.F.L. coaches they would most like to play for, the players picked:

Not only does Dungy top the list 3 of the remaining 4 were assistants to Dungy in Tampa. Not only has Dungy led a historic run of 5 straight 12+ win seasons, he's the favorite coach of players all over the league. Dungy's style of coaching is loved by players and clearly not an impediment to winning as Dungy, Smith and Tomlin's teams have been among the leagues best in their tenures. Even Herm Edward of the rebuilding Chiefs has led half of the teams he head coached to the playoffs.

Almost 1,500 NFL players completed the survey, roughly 80% of the league.

Why do players like Dungy? There's a lot to be said for his quiet and respectful leadership and attitude towards his players, but there may be another good reason 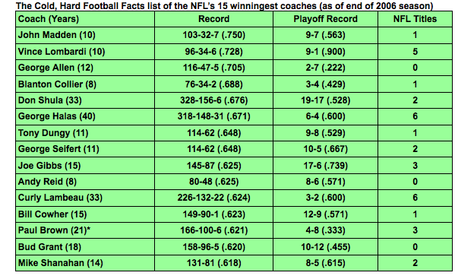 Last season's 13-3 mark brought Dungy to .661, and into sole possesion of 7th all time in win percentage. (table from CHFF)