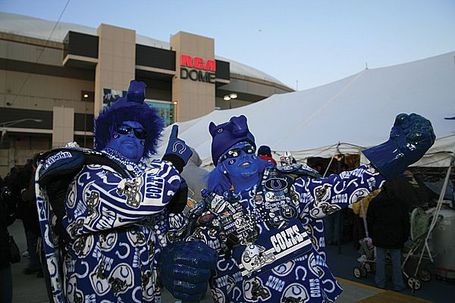 Deep inside Colts headquarters, the team took a quick break from their preparations yesterday for Sunday Night's game to have a little Halloween Party.  Here's a transcript from last night's festivities.

Charile Johnson: (Dressed as Keenan Thompson in Good Burger) So tell me again why you're in drag.

Mike Pollak: Well, as you know, all the rookies go through some hazing during their first season in the league.  Part of the hazing is that the non-rookies at each position get to pick out the costume for their rookie counterparts.  The linebackers made Wheeler dress up as Xena: Warrior Princess, Dallas made Jacob Tamme and Tom Santi dress up like the Olsen twins, Joseph and Dom made Mike Hart wear lingierie, Pierre Garcon has to walk around inside Anthony Gonzalez's owygen tent all night, and the three rookie O-linemen had to dress up as the Golden Girls.

But you were the one that picked out our costumes, so why are you asking me?

CJ: So I could get Jeff to take some photos of you while you were busy talking to me.  Did you get 'em Jeff?

Jeff Saturday: (Dressed as Zeus) Got 'em!  Deadspin is gonna love this!

Dwight Freeney: (Dresses as the Nutty Professor) Greetings, my friends.  Can someone please direct me to the Twizzlers and other assorted candies?

CJ: Wow Marvin, that's an impressive costume you have going there.  It doesn't leave much to the imagination, but it's mighty impressivee.

JS: Hey, has anyone seen Peyton yet?  I heard he had a top-notch outfit this year.

Unknown man dressed in Elvis costume: Uh, can I...uh...help you?

MH: Yeah, do you know where Peyton is?

MH: Peyton Manning, fatty!  You know 6'5", 230 pounds, laser-rocket arm.  He's got a build like yours and similarly large forehead, have you seen him anywhere?

Unknown man dressed in Elvis costume: Uh...can't say I have.

Unknown man dressed in Elvis costume: You know, I'm gonna do that.  The weather here is sweet!

Unknown man dressed in Elvis costume: Good call.  I can freeze my Gatorade as I hike and I'll have popsicles tomorrow morning.

JS: But all of those trick-or-treaters out there are gonna egg you!

Unknown man dressed in Elvis costume: Sweet!  I can make some omeletes.  Mmm...popsicles and omeletes, this is going to be the best breakfast ever!

Well, I better get to work on that.  (Using his best Elvis voice) Thank you, thank you very much.

[Unknown man dressed in Elvis costume walks away, in the distance you can hear the sound of eggs cracking, and if you listen real closely, you can hear someone saying "I'm having breakfast tomorrow!"]

MP: What was up with that guy?

CJ: I don't know, hopefully he was just someone's guest.  You didn't bring him, did you Marv?