A change in the playoff field, two playoff spot clinchings and one more team's playoff hopes extinguished this past weekend, as exciting a week as is possible with no matchups decided by less than 17 points.

Hart Attack beat up the Memphis Red Dogs and took their playoff spot. The Red Dogs didn't even have a chance as Hart Attack outscored their optimum lineup by fifteen points. The other Mike Hart named team was less fortunate, Gotta Have Hart won, but did not get the outside help needed to preserve Markfive05's playoff chances. Both 48 Layers of Kevlar and Pat Beach 4 President will be making the playoffs as their wins last week give them 4 game leads with 4 to play and the tiebreakers over at least one of the 5-5 teams. 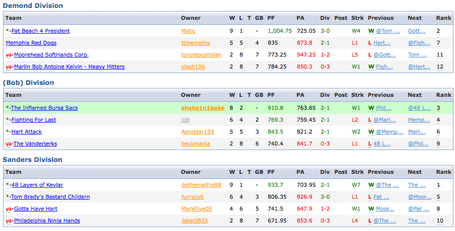 This week features the last regular season meeting among the top 3, 48 Layers of Kevlar, puts their 1st round bye on the line against The Inflamed Bursa Sacs. Winner will have all but clinched a bye.

Good luck to all, but less to (dothemathis98)