Know Your Colts History: It's Wayne's World, We're Just Living In It

Share All sharing options for: Know Your Colts History: It's Wayne's World, We're Just Living In It 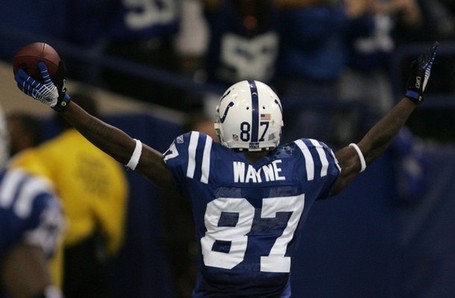 Maybe I'm alone in thinking this, but I think we've really been ignoring a fine season from Reggie Wayne. Now you're probably thinking to yourself "Jake, that's really crazy. And that's saying something considering the level of insanity that you bring on a weekly basis." Sure, you're probably right, but hear me out here.

Of course, Reggie is having another marvelous season. No one is going to argue that. But really, where does his performance fit in with the prevalent storylines that we've been dwelling on all season? In case you're not up on the major storylines, they go something like this:

Unless you think Reggie is the solution for #5 (which I'm not saying he isn't), he doesn't really fit into any of the any of those big storylines season and as a result, I don't think we've given him the credit he deserves for being such a huge part of why the Colts are still a playoff contender at this point. Without #87, we could very easily be staring 3-6, 2-7, or maybe even 1-8 in the face right now. Let's take a look back at how he's helped to the Colts to a winning record so far this season.

Now, sure you might say that Anthony Gonzalez did most of the work on that play, and I'm not going to deny that, but if Reggie Wayne doesn't haul in that lateral, the Colts would've had no shot. But in addition to helping out on that play, he also caught the game-tying TD and had a 20 yd. catch on a 3rd and 9 late in the game that put the Colts in field goal range for Adam Vinatieri's game-winning FG.

I think we all know what happened here. 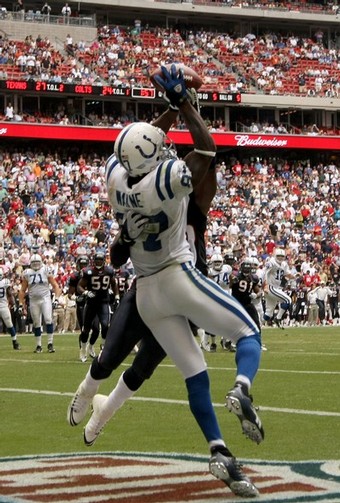 Marvin stole the show that week with his 2 touchdown performance, but Reggie didn't do too bad himself. Eight catches (including this spectacular grab) for 118 yards and a touchdown is nothing short of dominant, especially against a defense like Baltimore's.

I'm still not quite sure how Reggie held onto this, but I'm glad he did. Sure, it was only a 2 pt. conversion and the Colts ended up winning by 3, but if they hadn't converted that, the Colts would've only had a 1 point lead when the Patriots decided to kick a field goal on 4th and 1 at the 7 yd. line. Maybe if it had been a 1 point game, Belichick would've decided to go for it and from there a whole Pandora's box of scenarios opens up. Let's just say I'm glad he made that catch.

Lucky tip? Sure. But there was nothing lucky about the spin move Reggie used on Ryan Clark after the catch. That was pure skill on Reggie's part. If Reggie doesn't make that move to get to the endzone, there's a good chance that the Steelers force the Colts kick a field goal there, which would've cost the Colts 4 points, which turned out to be pretty important since they ended up winning 24-20.

But don't feel bad Ryan, there's nothing wrong with getting juked out every once in a while, especially when you're trying to tackle Reggie Wayne. 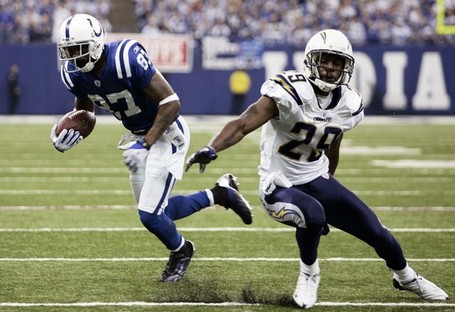 So to review, Reggie has 1 game winning touchdown, 1 game tying touchdown, a key 2 pt. conversion, and 65 yard momentum changing touchdown under his belt already this season. Maybe Reggie's high school coach had the right idea all along:

Ehret's next possession began with a trap play and a loss by the running back.

"I went over to the coordinator and said, 'What are you doing?' " North said. "He told me he was trying to fool them and keep them off balance. I told him, 'Throw the ball to Reggie.' "

Done and done. Ehret's next two possessions resulted in 27- and 11-yard TD passes to Wayne. One came on another hitch, the other a quick slant designed to beat Jesuit's double-team.

The moral of the memorable moment: keep it simple.

"You don't have to fool anybody if they can't stop you,'' North said. "I was a very smart coach when Reggie Wayne played for me.''