It took 11 weeks, but it looks like the Colts offense is finally healthy and on the same page. Indy stated before the game that their intention was to run the ball and balance the offense. They did just that.

Now, you will have to forgive me, but unlike shake n bake, I am not one who puts a lot of faith in statistics. Coming into the game, the Colts had the #32 ranked run offense in football. I, personally, do not think the backs and o-line for this team are the worst in football. So, I knew that ranking was misleading. When healthy, this offense can run on anyone.

So, it was nice to finally see the Colts say they were going to do something (like run the ball) and then actually do it. The team averaged 4.5 a rush and controlled the tempo of the game in the second half, where they scored 28 points. Like so many teams this year, the Colts have been held back because of injuries to their offense. Now healthy, they dropped nearly 500 yards of offense and 33 points in such a way that the team's efficiency is scary good. Indy was 10 of 15 on third down and did not turn the football over for the third straight game.

So, please excuse me when I say that statistics are nearly meaningless. Coming into the game, the Colts had shut down some of the best rushing offenses in football. They stoned the Steelers rushing attack last week in Pittsburgh. They shut down the Ravens. Yet, against the Texans they give up 9 yards a rush and 7.9 per offensive play. They also gave up some big plays in the game, something the Colts NEVER do.

Again, stats this season are more misleading than ever. Everyone, save the Giants and Titans, is playing an up and down, "box o' chocolates" style of football. You just don't know what you are going to get.

The Texans, fearing Dwight Freeney, bootlegged Sage Rosenfels all game long. Yet, Freeney still managed to bring Rosenfels down twice. Antonio "Mookie" Johnson continues to improve at NT, and Clint Session is rounding into a solid player. Thought Melvin Bullitt sealed the win with an INT (the second time in as many games, I might add) Bullitt did not play well most of the game. He did not play his run gaps well, which often resulted in big plays for the other team. It is beyond frustrating that Bob Sanders did not play. All this surgery and rest, and he still gets scratched. 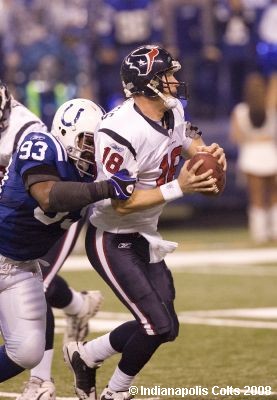 Back to the offense, Joseph Addai is now finally healthy, and anyone who questioned him can kindly let the door hit them on the way out. Addai ran all over Houston, and also caught a TD pass to go with his rushing TD. Dominic Rhodes also got into the act, gaining 48 yards on only 10 carries. Addai had 22. This is the kind of rushing balance the Colts must stick with. Addai with 25 touches, Dom with 10-15. Tony Dungy needs to commit to this kind of balance moving forward.

The one thing that must get corrected right now are the drops. Dungy should seriously consider benching players who continue to drop easy passes. If Peyton Manning puts it in your hands, CATCH IT! If you don't, fetch my Gatorade. Marvin Harrison did have a good game (8 catches, 77 yards, 1 TD), but he did drop a pass or two AGAIN.

Just like the offense, the defense needs to get some guys back for good and get some consistency. Bob Sanders in and out of the lineup is killing us. We need him in and he needs to STAY in. If he can't, IR him. Yes, I'm serious. We need people who are reliable so this team can finally start playing consistent football. Having players in and out all the time kills consistency. Stoning the Steelers running game in Pittsburgh one week and letting the Texans run all over you the next is driving me crazy. They also need to get Daniel Muir back into the rotation so guys like Mookie, Keyunta Dawson, and Eric Foster don't wear down. And, seriously, if Ryan Lilja and Roy Hall cannot play this week, IR them Mr. Polian. They have yet to play football this season and it is late November. They are taking up roster spots and not helping this team.

Despite it all, this team has won three in a row and clawed its way back into things. The theme at ESPN in the post-game shows (especially from their resident comedian, Jeremy Green) is "Can the Colts win with their shaky defense?" This is, of course, hilarious because the defense has carried the Colts much of this season while the offense has limped along. They've won three in a row playing some extremely tough competition, and when healthy this defense has dominated some good opponents.

Oh, and I'm sorry, but can we please cut out the "Kurt Warner for MVP" crap. With all the garbage Peyton Manning has dealt with this season, from bursa sacs to injured o-linemen to receivers dropping balls, to list Kurt friggin Warner over him as an MVP candidate is a joke. The Cardinals play in a division where their opponents have a combined 5-23 record. Four of Arizona's six wins have come from these teams, and Kurt Warner has kindly padded his stats against these their wretched defenses. Yes, I know the Cardinals have no control over who they play, but the strength of the opponent should factor into MVP talk. The Cards have won three in a row after starting 4-3. Those three wins in a row are against their "stellar" division opponents.

Meanwhile, against the Patriots, Steelers, and Texans the last three weeks respectively, Peyton Manning has completed 63% of his passes for 814 yards, 7 TDs, and zero turnovers.

That, my friends, is how real MVPs play.

Kurt Warner? Please. Can you imagine how he would have played this season under the conditions Peyton has? He'd have set the QB fumble record by Week 4.

There is one thing you can take from this Colts team: They are the guttiest in football. They do not hang their hands. They do not slow down. They do not quit. Ever. Peyton said it best following the game:

"We're a no-huddle team and we won because we never took our foot off the gas."

Notice how he said they are a no-huddle team? Not offense. Team. This team is peddle to the floor, all holds barred, in your face, and about a billion other cliches. This is a high character, tough-minded group, and I'm damn proud to root for them.

Remember at about Week 5 when we thought all hope was lost? This is why you have to sometimes wait things out and see how they fall into place. Yes, Tennessee won today, but they might have knocked Jacksonville out of the playoff picture in the process. If silly things like tie breakers come into play, the Colts have beaten the Ravens, Pats, and Steelers already. They are also 5-2 in the conference.

Slowly, but surely, we are seeing the team we knew was there. Now, we just need it to show up and play consistent Colts football week in and week out. Give credit to the Texans. They are not happy over at Battle Red Blog, but their team is no pushover. The Colts needed their best offensive performance of the year to defeat them... barely.

Hopefully, players like Sanders, Hayden, Muir, and Lilja can contribute this week. For now, we enjoy our team's third win in a row. Go Colts!