The top three remain unchanged, after Lee Evans' mysterious disappearance taking the starting spot of Ryan Grants 21 point burst cost me the chance to move into the #2 spot and likely my hopes of a first round bye (2 back without the tiebreaker with 3 to play) 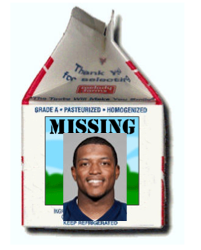 Changes in the rest of the playoff field though. jbd's Fighting For Last has finally starting living up to it's name, dropping their 3rd straight and moving them behind Tom Brady's Bastard Children and the Memphis Red Dogs into 6th place. Hart Attack lost the closest game of the week on Braylon Edwards sudden ability to once again catch footballs. The loss drops Markfive05's team into 7th, one game behind Fighting For Last, but they have the tiebreaker and a game against Fighting For Last on the remaining schedule. 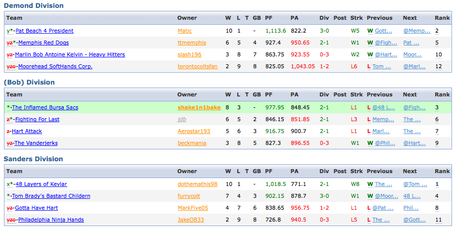 The upcoming week features 2 top 3 facing teams struggling for their playoff lives and the last stages of the battle for the Sanders division. Tom Brady's Bastard Children can keep their division title hopes alive with a win over 48 Layers of Kevlar. A win would bring furrycolts' team to 2 back with the tiebreaker with 2 to play. A victory for dothemathis98 would seal the division and clinch a 1st round bye.