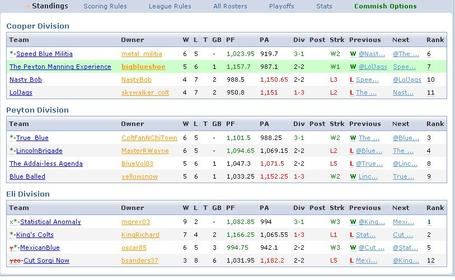 The teams with the green stars next to the their names are the teams currently slated for the playoffs. Currently, I am second in the entire league in points scored, but on the outside looking in. Next week's game between me and Speed Blue Militia will likely decide the division. Per usual, mgrex30's obsession with stats has given him a gaudy 9-2 record. King's Colts have also performed well, but his 1-3 mark in his division have hurt him. The Peyton Division seems the toughest. Any one of those teams has a shot.

Just like in real life, the playoffs for the Stampede Blue League will go down to the wire. The Shakedown League update is here.