Share All sharing options for: Nearly 10 years later, Peyton Manning and Kurt Warner battle it out again for NFL MVP

I tell you what. As of right now he is 4th or 5th ranked for my MVP. He has some games coming up against some totally weaker foes, if he can demolish the Browns, Lions, Bengals, and pad his numbers to outshine Warner's, and throw in his 4th quarter comebacks this year, hands down, I will throw in the towel, he’s earned it. Right now here is what I have

Good points, but I don't agree. Maybe Jay16 is a bit more unbiased than me (he probably is) but I think they will give the MVP to Peyton Manning this year if he gets the Colts in the playoffs and not Kurt Warner. Interestingly enough, just two weeks ago, we SB Nation writers had Clinton Portis practically locked up as NFL MVP at the mid-season point. Now, he is barely even in the conversation.

The people at the top of the conversation are Peyton Manning and Kurt Warner, and it was nearly ten years ago that a then-unknown Kurt Warner was battling it out with a second year phenom named Peyton Manning. In the time since, both have won Super Bowls, multiple MVPs, and several division titles with their respective teams. Yet, Peyton has clearly proven he is the better QB, and it is this reason why he will likely take home his third MVP this year. 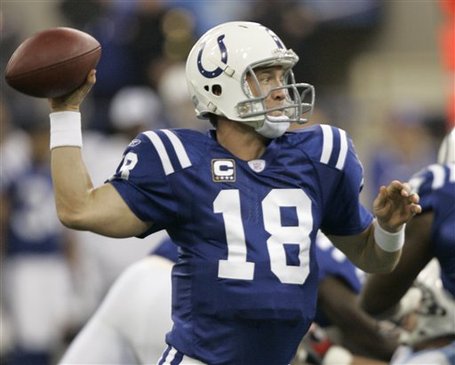 In the fourth quarter of big games, Peyton has been phenomenal

Look, I'm not going to knock Warner. FO ranks him as the most efficient QB in the NFL right now. He is completing 70%-friggin-percent of his passes. His team is poised to win their division this Sunday (they won't because they are playing the Giants, but the fact that they can lock up their division in November says something about their success this year). Warner has been the driver of the Cardinals offense, and with WRs like Larry Fitzgerald and Anquan Boldin the Cards are able to put up points quickly. This has taken pressure off their defense, which is more solid than good.The other pro in the Kurt for MVP corner is he has played consistently well since Week One, and I think there is merit to the notion that the MVP is for the best player from Week 1 to Week 17, not from Week 8 to 17.

But the plain and simple truth is Peyton Manning is a better QB than Kurt Warner, and he has had to fight through a helluva lot more adversity this season than Warner has to get his name into the MVP consideration.

Peyton started the season hurt, recovering from a staph infection in his knee and surgery to remove his knee's bursa sac. He showed up to the first game of the season thin, out of game shape, and not as mobile as he once was. But, in typical Peyton form, he fought through it. Adding to this is the sheer holy freaking crap difficulty of the Colts schedule. Starting with a healthy Chicago team, going to Minnesota, an 0-2 Jacksonville team, a totally desperate 0-3 Houston team, Green Bay at Lambeau, Tennessee in Nashville, and Baltimore with their foot-to-your-nuts defense.

Contrast this with Warner, who plays in the division that features the hapless Rams, 49ers, and Seahawks. Warner's division opponents have a combined record of 5-28, and Warner has feasted on these teams this year. 4 of Arizona's 6 wins are against the terrible NFC West. And while 2 of Indy's 6 wins are against the 3-7 Texans, I'll argue that the Texans are about better than the garbage that passes for "competition" in the NFC West. 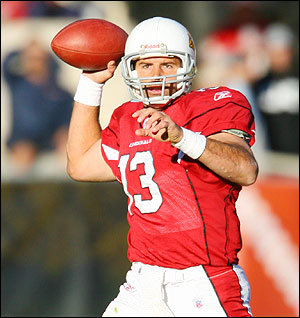 Kurt Warner is having an amazing 2008 season.

Where Peyton trails Warner is in the stats. Warner will also help his team win their division. Peyton and the Colts likely will not win the AFC South. But what Manning has done is willed his team to comeback or razor-thin wins despite the statistics. The Minnesota game is one such example. In the game, Manning had a 72 QB rating for that game, throwing 2 INTs and facing a pass rush that knocked him around all game. But Manning's heroics in the 4th quarter, including an outstanding throw to get a key first down to Reggie Wayne, got the Colts in position to win the game on Adam Vinatieri's 48 yard FG. Two weeks later, Manning had another big fourth quarter comeback at the expense of Sage Rosenfels and the Texans.

Peyton then went to Pittsburgh and threw 3 TDs in Indy's first win there in 40 years. Several weeks prior, he shredded Baltimore's outstanding defense.

The case for Manning is not the overall statistics, but how he has performed in the clutch against incredible adversity. With injuries to his offensive line and his running backs, Peyton has had to loft up 380 attempts, exposing him to more hits from defenders. Yet, despite the hits, Peyton Manning has not fumbled. Kurt Warner, a known fumbler, has coughed it up 7 times (almost once a game) and lost 5 of them. Fumbles are not included in standard NFL QB rating. Why, I don't know.

So, when you factor in these other elements (strength of opponents, performance in the clutch, and overall importance to the team) then Peyton Manning is the clear front-runner for MVP. If your focus is simple numbers, then it is Warner. I personally do not think MVP voters are going to give Warner (who has not been relevant since the Rams lost the Super Bowl to the Patriots in 2001) the MVP over Peyton, especially if Peyton closes the season strong and gets Indy into the playoffs.

I realize that Warner winning MVP would be a big boost to the Cardinals who have had very little to cheer about pretty much since they moved to Arizona. But the simple truth is that Warner might not be a Cardinal next year, and sitting on their bench is the first round draft pick of 2006 (Matt Leinart). MVP voters will factor that into their consideration. And when you compare Manning's play under pressure to Warner's, Peyton has the edge. In any case, it is fun and ironic that here we are, nearly ten years later, talking about Peyton and Kurt as MVP candidates.

One thing I can’t imagine – If Kurt Warner wins MVP this year, it will be his third, making him only the 2nd player to win 3. Three freakin MVPs! The other, as we all know, is Brett Favre, who is a sure fire first ballot hall of famer. I’m going to go out on a limb here, and say that Kurt Warner is not really even in the discussion for the Hall of Fame at this point. It just seems so strange that a QB who [could win] 3 MVPs isn’t even in the discussion of greatest of all time, and probably not a Hall of Famer.

This is another reason why Warner will not get the MVP this year. He is not a Hall of Famer. He has had three great NFL seasons, and has lost his starting job several times with several teams due to erratic play.