The Dungy Bucs vs The Gruden Bucs

Share All sharing options for: The Dungy Bucs vs The Gruden Bucs

Tony Dungy took over a team that hadn't had a winning record in a decade and had a grand total of 3 playoff appearances in it's 20 year history with just one playoff win. In the next 6 years with Dungy the Bucs made the playoffs 4 times, had the winningest season in franchise history and became the winningest coach in franchise history (a mark it took Gruden an extra 10 games to pass).

But no one denies Dungy is a great coach who turned around a pitiful franchise. The criticisms leveled at Coach Dungy are that his teams couldn't win the Superbowl and that he never built an adequate offense in Tampa.

Commenter Ayrshire said this about why the Bucs won a Superbowl under Gruden, but not Dungy,

Dungy clearly was partly responsible, as I mentioned above, for creating a great defense (maybe the best of all time) which could only go so far with no offense. Gruden came in and finished the job by actually adding an offense which was more than run, run pass, punt.

Maybe Gruden needed more time to add an offense (though then adding an offense wouldn't be what won them the Superbowl). The next season, 2003, the Bucs were 17th in offensive DVOA and remained 18th in points scored. 3rd year's the charm right? Nope, the Bucs offense stepped backward to 22nd in DVOA and 23rd in points scored. The Gruden Bucs Offense never topped the offense in Dungy's final year in points scored and didn't finish higher in DVOA until last year.

That was just one year under Dungy, even though Gruden's Bucs didn't top that year (which wasn't even the Dungy Bucs best) in any of the 5 years after Dungy was fired, maybe they average out better.

The Bucs under Dungy had a better offense than the Bucs though Gruden's 6 full years as the head coach. 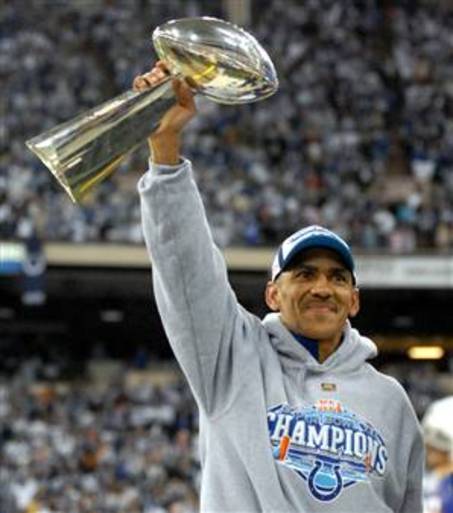