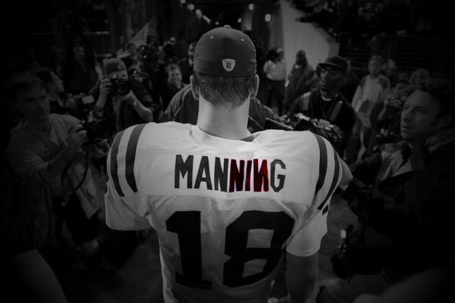 At first, it might not seem like Peyton Manning and Nine Inch Nails' do-it-all man Trent Reznor have a lot in common.  One is a heavy metal rocker, the other is the quintessential All-American boy with an oversized forehead playing quarterback in America's heartland.  It might seem like an odd fit, but thery have more in common than you might think.

The comparison doesn't end there.  As you'll see, NIN's albums tell the story of Peyton's career quite well. 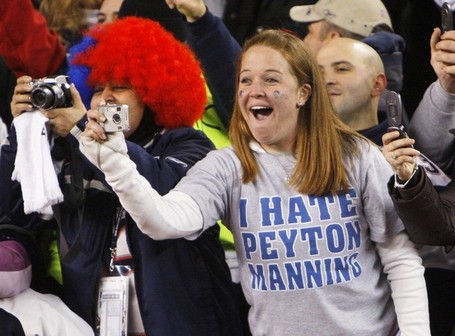 High School - 2000: Every great athlete has had to deal with their share of haters.  For all the people that have the utmost appreciation for their abilities, there are always those that like to hate on greatness.  It started in high school.  Think about it, did anyone really like the stud athlete at high school with the rich dad? A lot of people may have pretended to like Peyton, but you can bet Peyton was smart enough to know a phony friends when he saw them.

It only got worse once he decided to go to college at Tennessee spurning his dad's alma-mater.  That choice put him at odds with Ole Miss fans who wanted him at Oxford and Florida fans who hate anything and everything involved with Tennessee.

After turning pro, more people began to appreciate his amazing talents but more people started to hate on him as he's become a bigger and bigger celebrity.  Some people didn't like him because he's on a rival team, others didn't like him because of his forehead, or all his commercials, or because he's not quarterbacking their team, or in rare instances, because they have a vendetta against salsa dancing.

Although the reasons differed, Peyton always knew that whenever he stepped on the field that he'd be the target of the Pretty Hate Machine. 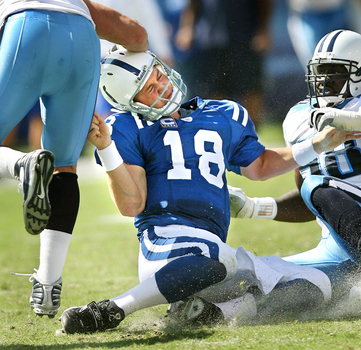 2001: Sometimes defensive linemen reach that target.  Those defensive linemen don't go easier on you because you have a rocker arm or heaps of accolades.  Peyton feels pain just like the rest of us, and we don't have to go up against 300 pound linemen every week.

Despite that, every time that Peyton's been knocked down, he's gotten right back up.  The only exception was one play in 2001 when he had to go over to the sidelines to get his broken jaw wired shut.  How many days of work do you think you'd call in if you had to have your jaw wired shut? 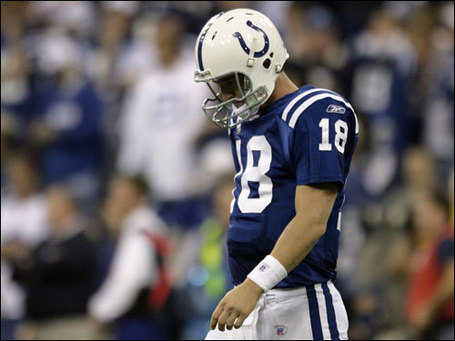 2002-2004: For anyone else, earning 2 MVP awards while throwing 105 touchdowns would be the ultimate 3 year span.  For Peyton Manning, it was 1,095 days of agony.  Despite all of his great performances and gaudy statistics he couldn't get his team over the top.  Everyone outside the Hate Machine knew that Peyton was doing all he could to get them there, but the surrounding parts just weren't there to be a serious contender. 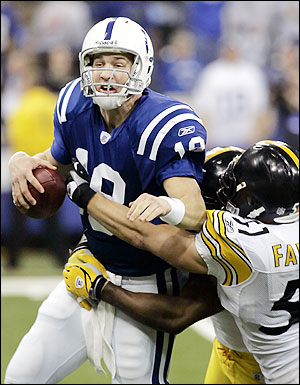 2005: Finally, Peyton gets the support he needs.  Dwight Freeney continued his development into an unblockable beast, Bob Sanders became a starter and had an immediate impact on the defense, and it looked liked the Colts had all the ingredients necessary for a title run.

Everything was going right on schedule until a match-up with the Steelers exposed flaws with the Colts and Peyton that relegated them to another early exit.  Almost immediately after the game, the Hate Machine came out full force saying Peyton was too fragile to handle playoff pressure and he'd never win a title. 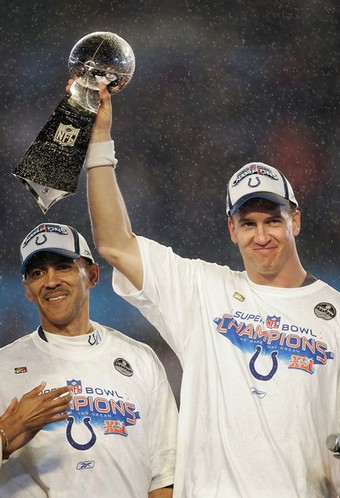 2006: After the previous year's debacle, it looked like the stars just might not ever align for Peyton.  Even though he had worked hard in the off-season on improving his footwork and examining blitz packages to limit the pass rush that had doomed them the year before, it just didn't seem like it would be enough.  An abysmal run defense certainly gave off the impression that there wouldn't be any star alignment in 2006.  But just when it looked like things were at their worst, Peyton dug in tooth and nail and played the best football of his life, quieting the machine once and for all. 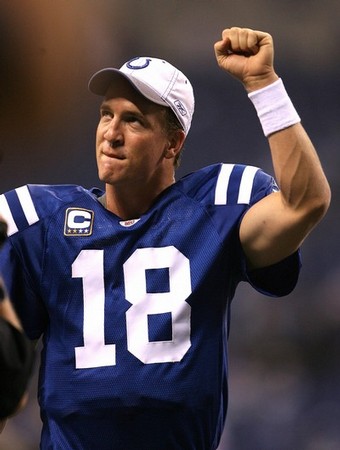 2008: Every player has one year that's so bizarre that it shouldn't even be on the continuum with the rest of them.  For Peyton, 2008 is that year.  Think about all the new things he's had to deal with this season:

There's been a lot to adjust to this season, but Peyton has handled it all and done so exceptionally well.  He might not have the same numbers that he put up in his other MVP campaigns, but he might mean more to this team now than he ever has.  It was downright embarrassing watching this team stumble through the preseason and the start of the regular season with Peyton either out or at far less than 100%.  Where others would point to excuses, Manning has thrived and somehow managed to thrust himself into the MVP debate, despite all the craziness that's gone on around him this season. If that's not a testament to the man's greatness, I don't know what is.

Throughout his career Peyton has been followed by 4 ghosts (well not literally, but work with me here) that people compare him with any time he's brought up in a conversation.

Like a free album, Peyton Manning has been a gift for Colts fans since day 1.  There have been some rough patches along the road, but every time that Peyton Manning lines you know that something good is probably coming.  Sometimes on those glorious Sundays when we get to see Peyton Manning carve up the other team's defense, it almost feels like it's routine.  Like we should come to expect his dominance in the same way that we expect to see the sun and the moon everyday.  When Peyton is playing, it's almost like every day is exactly the same.  I hope it stays that way for a long time.