Only two weeks left before the playoffs. All three divisions andd one of the first round byes have been clinched, but 3 spots are up for grabs with 5 teams within 2 games of 6th.

dothemathis98's 48 Layers of Kevlar won their 9th straight to clinch the division and a first round bye, with a 2 game lead and the tiebreaker over the 3rd place team in the league (mine). A win over jdb's Fighting For Last, sealed the division and a playoff spot for my team, The Inflamed Bursa Sacs. Currently holding the 2 spot is Matic's Pat Beach 4 President, with a 1 game lead and the tiebreaker over my team. One win for Matic or one loss by me and Pat Beach 4 President gets the other 1st round bye

Both Tom Brady's Bastard Children (furrycolt) and the Memphis Red Dogs (ttmemphis) are a win (or loss by Hart Attack) from clinching a playoff spot.

3 teams sit two games back of the 6 with only two to play. Both beckmania's The Vanderjerks and slash196's Marlin Bob Antoine Kelvin-Heavy Hitters (4-1 after a 0-7 start) can get the 6 seed with some help. Both need Fighting For Last to lose out and need Hart Attack not to win out.

Gotta Have Hart (Markfive05) is only two back in the standings, but lost head to head to Fighting For Last so would lose on tiebreakers even if they did tie up the standings. 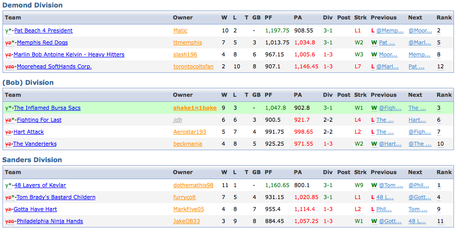 This week also saw the highest team score of the year. 157.6 Points (nearly 20 over the previous high) by JaketheSnake's Philly Ninja Hands. That is how you play for pride ladies and gentlement.

Good Luck to all, but less to Beckmania's The Vanderjerks