Share All sharing options for: Bench Roethlisberger for Leftwich?

Last night, an ineffective, injured Ben Roethlisberger left the game with a hand injury. His back-up, Byron "Fatty McButterpants" Leftwich, came into the game and lit up Washington's secondary. Leftwich delivered bullets to his WRs, and the Steelers won 23-6.

After the win, Blitzburg at Behind The Steel Curtain suggested this:

More below on Leftwich, but anybody else notice that the case of the 'drops' that has mildly plagued our WRs at various times this year, including in the first half, disappeared in the second half? I think part of that is just the general vibe that a QB exudes with his reads and throws. Ben probably could benefit from at least a half on the bench healing up, if not one more game. We'll see what the medical report says. But with Leftwich delivering the ball on time, our WRs suddenly made every catch in sight, including a number of quite tough catches on big plays. Just a thought.

Wow. I never thought I'd see the day when a Steelers fan would suggest Ben Roethlisberger should get benched (temporarily) so he can take pointers from Byron friggin Leftwitch, the poster boy for over-hyped college fat ass who couldn't make it in the pros. Yes Colts fans, this is the same Byron Leftwich the Colts defense often made their punching bag; the same doofus who would taunt the crowd one quarter and throw multiple INTs the next; the same loser who was run out of Jacksonville because, quite simply, he sucked and it took the Jags five years to figure it out.

Now, I'll credit Leftwich on last night's game. He came in and played well. But Leftwich was only signed as a back-up QB early in the season because Pittsburgh lost Charlie Batch, their longtime back-up, in pre-season. Leftwich was not invited to any training camps this year, and did not play in pre-season. Last year, he "played" in Atlanta under Bobby Petrino. So, it seems Leftwich's good play last night was a bit of a shock to everyone in the league, because pretty much everyone thinks Leftwich stinks.

Bench Ben for Byron? What? Blitzburgh is not alone in this suggestion:

I'd like to see the Leftwich naysayers now. But on that topic, I gotta say, if playing Leftwich for the next couple games is what it takes to get Roethlisberger back on track, then by all means, do it. Now, I'm not gonna pull a beerman here and say that Ben's no good; he's still a premiere QB. However, he has fallen into some bad habits of hanging on to the football way too long. Whatever happened to the good old days when he would roll out of the pocket? Has Arians prevented him from doing that anymore? But anyway, Ben needs to take a leaf out of Byron's book; stay calm in the pocket but at the same time get rid of the ball quickly.

OK. You can see me. Hi. Byron Leftwich still sucks. One good half of football does not erase five years of suckitude at the QB position. 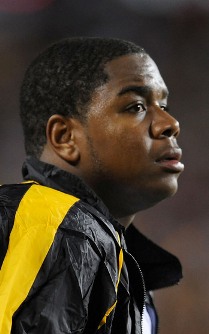 The face of determination, folks.

Unless Roethlisberger is extremely hurt, the Colts should expect him under center this weekend in Pittsburgh (where the Colts have never won, ever). Roethlisberger has injuries to his hand and shoulder, and he may need a few days to heal up. I know most people have some doubts about who they would rather see the Colts face, but the answer is obvious. Roethlisberger, healthy, is a Pro Bowl QB. Leftwich is a fat whiner who takes tons of sacks and throws INTs. Bob Sanders feasted on "Lefty" for years. Big Ben is someone you fear, and I do legitimately hope he is OK.

Has Fatty changed? Is he finally working out and studying game film? Can he now finally read a defense? Maybe. I genuinely hope so. I just think that Pittsburgh's better chance to beat Indy is to have Roethlisberger under center.