Playoff berth's are nearly clinched and 4 teams are officially out of their division race. The top 6 remained on top and in the same order. The big 2 vs 3 matchup of the week was never close. Thanks to my worst day of the year on starter choices (Garrard over Garcia -12.2 pts, Andre Johnson over Driver -7.4pts, Lee Evans over Anthony Gonzalez -14.4pts) my Inflamed Bursa Sacs fell to Pat Beach 4 President.

In the only game with a single digit margin this week Tom Brady's Bastard Children escaped with a win over Marlin, Bob, Antoine, Kelvin-Heavy Hitters after slash196 was too late in trying to switch Adrian Peterson back into his starting lineup. Tough break. If it makes you feel any better slash196 you still would have been eliminated from your division race if you had won. 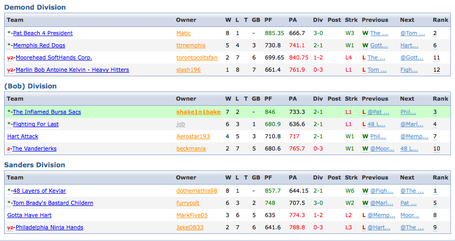 Matchup of the week is Memphis Red Dogs vs Hart Attack. Winner takes the 6th seed. A loss by Aerostar193 would guarantee playoff berths to Matic and dothemathis98 and allow me to clinch a playoff spot with a win.

Good luck to all, but less to Jake's Philly Ninja Hands