(Of course, you should know going in that this is all made up, but just in case you weren't sure, now you know that this isn't real.  Now, let's get back to suspending disbelief.) 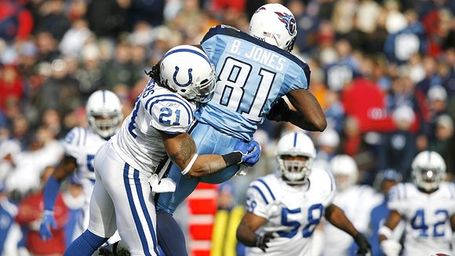 "That don't even make sense man.  That happened almost two years ago, and it was a legal hit," said Sanders, who said he would appeal the fine.

Sanders was not penalized for his hit during the Colts' 20-17 loss against the Titans on December 3, 2006.

"It's ridiculous.  You can't hit 'em high, you can't hit 'em low, and now apparently you can't even hit 'em in the past," Sanders said. "Maybe they'll fine me for thinking about who I'm planning on tackling next week." Sanders was fined for "making an especially mean-looking tackle."

According to Randall Liu, information manager for the National Football Conference, Sanders was fined because "I was doing a Google image search and I came across that photo and I thought to myself 'Boy, that looks pretty rough' so to be on the safe side, we decided to give him a fine, even though the hit happened a few years ago." He said Sanders’ actions violated Rule 12, Section 2, Article 12(2) of the N.F.L.’s official rules.

"It's kind of silly," Colts' coach Tony Dungy said Friday. "He wasn't flagged on the play and  no one complained about the hit after the game, not even Brandon Jones.  What's the big deal?"

When asked why all of his players were wearing flags during practice, Dungy replied "Troy was right."