What happened to the Detroit Lions?

Share All sharing options for: What happened to the Detroit Lions? 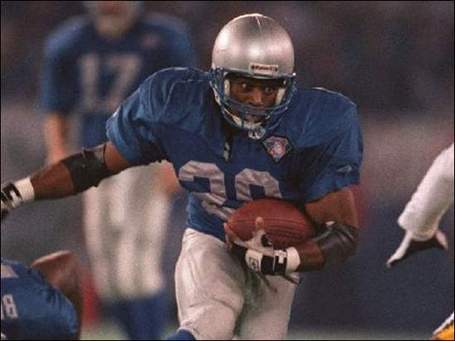 I love the throwback uniforms for the Detroit Lions.They wore them back in 1934; blue jersey, silver numbers, and a steel-looking helmet with no logo. Just awesome! A simple, clean, effective uniform that conveys everything positive you ever think of when you think Detroit: Tough, steel-hearted, and determined.

Sadly, that is not the state the current version of the Lions are in, nor is it the state of the city of Detroit. We Hoosier fans have long had a loathing for Detroit, stemming mainly from the NBA brawl in that cage they refer to as The Palace at Auburn Hills. That brawl was started by Detroit Pistons players and fans, and in the end it put a massive dent in the NBA from which the league is still recovering. But for the football team, we Hoosiers don't hold much animosity. Most Colts fans of my generation did not grow up solely watching the Colts. They were far too bad at that time to take seriously. Many of us watched the Bears, Bengals, and Lions.

I had a special love for the Lions because of Barry Sanders, the greatest running back this league has ever seen.

But in recent years, the Lions have fallen into the pit of irrelevancy due in most part to their incompetent ownership and management. The same owners who own the Lions are the same people that have driven our auto industry into the ground, and they are the same people who thought Matt Millen had the brains to run a multi-million dollar sports franchise. I personally wouldn't trust the Ford family to run a car wash, let alone a car industry or the Detroit Lions.

Now, the Lions are sitting at 0-13, and are flirting with a dubious history of being only the second team in NFL history to go winless in a season (the 1976 Buccaneers are the other, QBed by the one, the only Steve Spurrier). With the Ford family floundering and Matt Millen fired (or, so we think), the guy left holding the bag is Lions head coach Rod Marinelli, a good man and an even better coach stuck in an impossible situation.

And, naturally, the vultures are circling.

Recently, several supposed experts on how to run a franchise have come out and taken a few shots at Rod. One of them is former NFL GM Mike Lombardi:

The Lions as an organization bought into the whole Rod Marinelli concept of "I need my guys to win," not "I need good players to win."  The talent of the players was not a concern. The prevailing factor in making personnel decisions was attitude and knowledge of the system.  Everyone in the front office shares the burden of putting this plan into action.  Loyalty does not mean you just nod and take orders. Loyalty is a willingness to share you opinion and be brave enough to stand up for your beliefs.  Clearly, no one in the Lions’ front office stopped Rod from bringing in these players.

Forget the fact that Lombardi comes from the Oakland Raiders, <sarcasism>an organization with such a wonderful track record of producing top NFL executives</sarcasism>. What Lombardi leaves out is the impossibility of Marinelli's situation, brought on by years of poor management prior to his hiring and compounded by devastating injuries during this season. I agree with Lombardi's definition of loyalty, but one of the reasons Lombardi is no longer a general manager in the NFL is because when he was employed as a GM he was not very good at his job. So, when he criticizes someone else for making poor judgments on talent, it's like OJ Simpson lecturing delinquent children on the moral consequences of stealing.

Say what you want about moves this offseason, where Marinelli seemed to have more input in the draft, but some of those moves have actually set Detroit up well for the future. The Shaun Rogers trade was an obvious move. Rogers was an overpaid malcontent in the locker room and did not fit Detroit's scheme, which is a Tampa 2 defense that requires faster players, not fat farts with attitude problems. And despite Rogers playing well this year, it hasn't done wonders for Cleveland's season. The Browns still suck despite getting Rogers, and their reward will be a worse draft pick selection in the first round than the Lions. 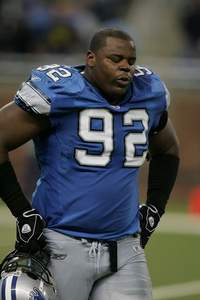 Trading Shaun Rogers was a "duh" move for Detroit.

Despite great numbers, he has done little to help Cleveland this year.

To offset the turnover, Marinelli brought in players like Brian Kelly and Dwight Smith. These are veteran players who are familiar with the Tampa 2 scheme and have championship game and playoff experience. Such moves are not uncommon. When Indianapolis was switching from Vic Fangio's horror show of a defense to Dungy's Tampa 2 back in 2002, they brought in players like DT John Cannida, who knew the Tampa 2 system and would help others learn it. Unfortunately, adding veterans like these is not the primary way to build a Tampa 2 defense. It is the draft that builds such defenses, and no one has been worse at drafting the last 8 years than the Lions. Matt Millen had total and complete control over the Lions drafts during his tenure, and as more information has surfaced since Millen's firing the more it seems apparent that Millen simply did not work hard enough to make his team better. As a result, Detroit's defense is a wreck. The last few years, Marinelli has had more input in the drafts, and the results have been promising players like Calvin Johnson, Cliff Avril, and Ikaika Alama-Francis.

So, for someone like Lombardi to take shots at Marinelli (who isn't even the decision-maker on personnel in Detroit) is just laughable.

Add to this the injuries Detroit has suffered in 2008 and you have a recipe for disaster; a "perfect storm" for losing. The real casualty here is Rod Marinelli. He will get fired, and that's a shame. He is one helluva coach, and people who say otherwise simply don't know anything about coaching. He is a detail oriented guy who players work hard for. While teams like Jacksonville are blatantly quitting on their coach, week after week we see a Lions team competing. That is a tribute to Marinelli and his staff, who have had to use five different QBs this season, including Daunte Culpepper, who they signed off the street on a Monday and had him starting the game that Sunday. Culpepper is out for this week's game, and now back is Dan Orlovsky. The Lions have also played Jon Kitna (IR), Drew Stanton, and Drew Henson this year.

With 11 players on IR, and with so much inconsistency at the QB position, faulting Rod Marinelli and his staff for this season in Detroit is just foolish. The fault lies with the owner, as incompetent and clueless as it gets. When Rod Marinelli is fired, it is my sincere hope the Colts make a play to sign him as an assistant. I would really want this if Tony Dungy retires this off-season. Dungy thinks the world of Marinelli, and if Dungy likes you it means you are pretty good:

"[Rod Marinelli's] a guy that I would want to play for.

"When I talk to players there in Detroit, I think they enjoy playing for him. They work hard. They’re pretty fundamentally sound and pretty detail-oriented. So it’s just kind of a mystery why it hasn’t gone better, for sure."

It hasn't gone better because the owner is a clueless schmuck and their former-president of the team was a lazy bastard. Detroit has played in several very close games this year, and if this team had more talent the record would be much, much different. Look no further than Calvin Johnson, who is thriving despite the team losing. THAT is what Rod Marinelli does when he gets a hold of some talent.

Moving forward, the Lions will have the opportunity to totally re-create their organization. Their trading Shaun Rogers and WR Roy Williams were heists for their team. Williams is stinking it up in Dallas despite having Tony Romo as his QB, and Rogers has done very little to improve Cleveland's fortunes in the win-loss column, which was the sole reason Cleveland traded for him and his bloated contract in the first place. The Lions have 8 picks in the 2009 draft, and 5 will come in the first 3 rounds. They are on firm ground financially, with little money wrapped up on over-rated players, and they have a future star on their hands with Calvin Johnson.

So, if someone in the Lions ownership circle can bypass the drooling zombie that is William Clay Ford and hire a person who is a genuine football manager, the Lions could get real good, real quick. Look what Tom Dimitroff has done in just one off-season with the Falcons. If Detroit managed to sign someone like Marc Foster (Director of Scouting- NY Giants) or Ruston Webster (Vice President of Player Personnel- Seattle Seahawks), they could develop into a good football organization very quickly. This current list of rejects is not the kind of people fans should want running their Lions.

The key is bringing in football people to run your football team.