Know Your Colts History: All Aboard The Failboat

Share All sharing options for: Know Your Colts History: All Aboard The Failboat 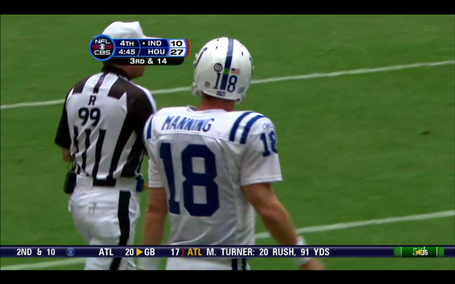 "How much do you wanna bet I can still win this game, ref?"

Longtime readers of the blog may know that Know Your Colts History started out as a segment where I'd take screencaps from the History of the Colts DVD and add weird captions to them.  Eventually, I wore that DVD out (as well as the Super Bowl champs DVD) so I had to go to actually writing stuff each week (well, if you call what I do "writing").  But for this week at least, the KYCH tradition will be relived as we take a look back at the 4 minute sequence that saved the Colts season. 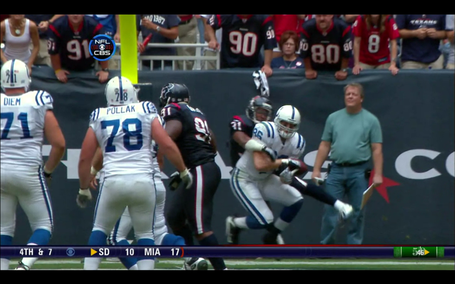 If that ball slips about an inch farther out of Santi's hands, the Colts would've been 1-3. 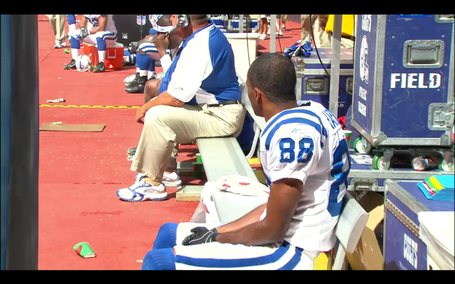 The rest of the team gives Marvin his distance after he reveals to them that he was no longer a prisoner of "the tyranny that is deodorant." 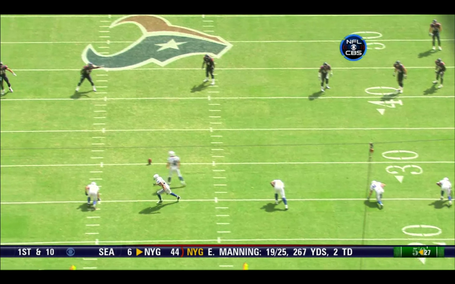 Melvin Bullit rushes off of the field after realizing that his cupcakes had finished baking. 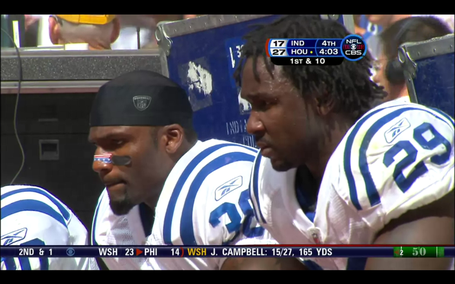 Joseph and Dom both come to the realize at the same moment that they were each starting the other one in their fantasy league this week. 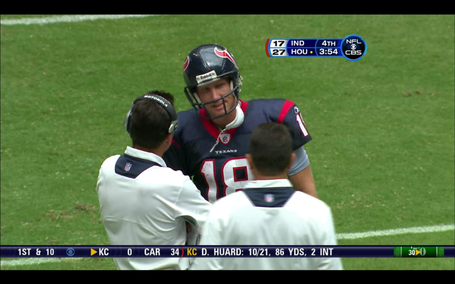 Gary: "Good job today, Sage.  Have you thought about what candy bar you want after the game?"

Sage: "A 3 Musketeers bar would really hit the spot."

Gary: "Fluffy nougat?  No no no no no.  You deserve something big today.  I'm getting you a King Size Butterfinger. 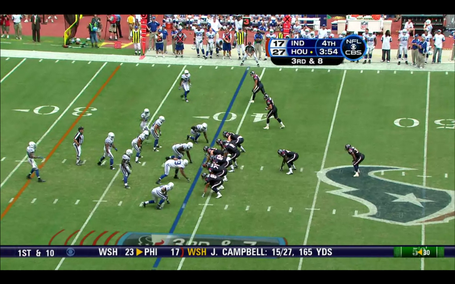 3rd and 8, up by 10 with less than 4 minutes to go.  Sounds like a good time to give it to the running back and pound it up the gut and run off some clock. 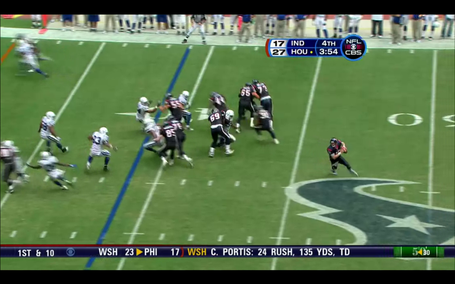 ...or play Russian Roulette.  Whatever. 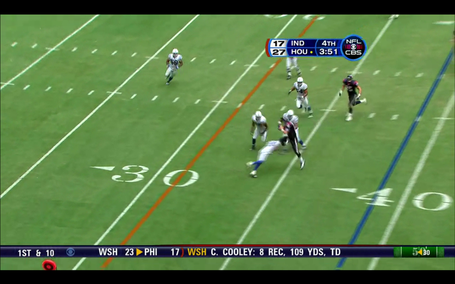 Note where he's taking off from.  In order to get the first down, Sage would've had to dive 4.5 yards (about 13-14 feet) to get to that yellow line, while simultaneously hurdling a Colt.  You can question a lot of things about Sage Rosenfels, but you can't question his confidence when it comes to doing things that no 30 year old in full pads should be able to do. 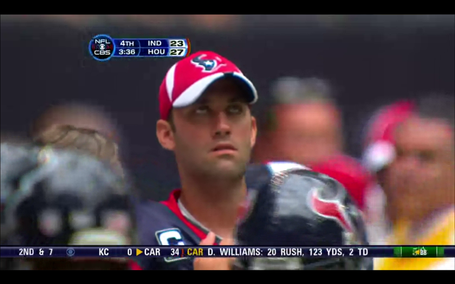 When Matt Schaub is rolling his eyes at you, you're not having a good day. 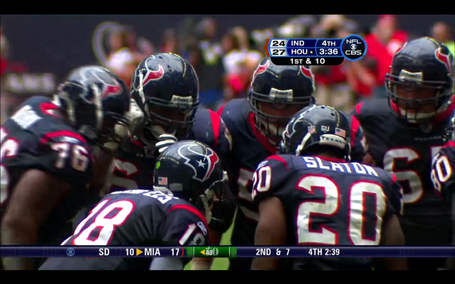 "Alright guys, that was a tough break, but we're still up by 3.  Let's go out there and win this game!  We've got nothing to panic about guys, nothing.  We've got this.  We've got this!  Why are you all looking at me like that?" 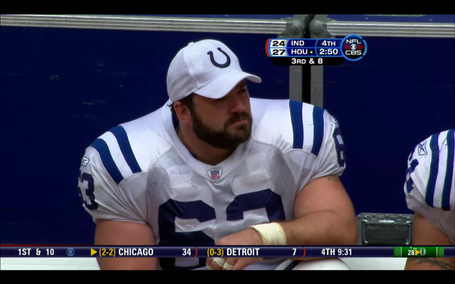 "You know what I could go for right now?  BLOOMIN' ONION." 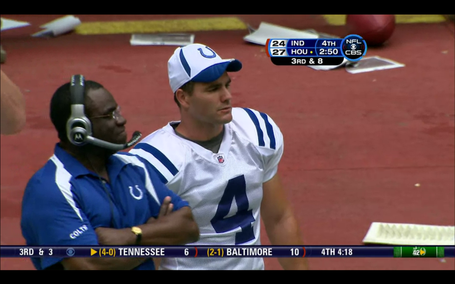 "Hey coach, how much do you want to bet that they won't even need me to finish this comeback?" 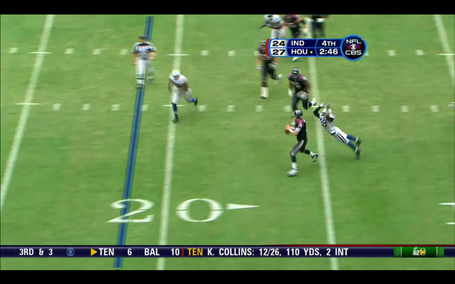 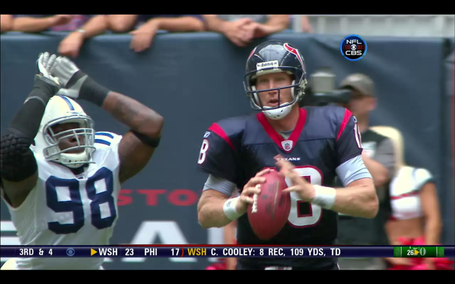 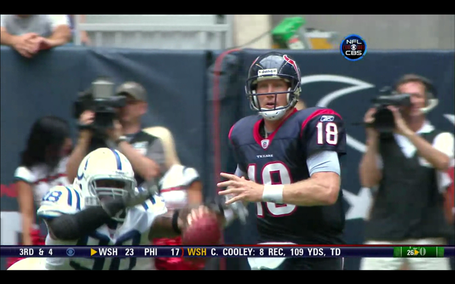 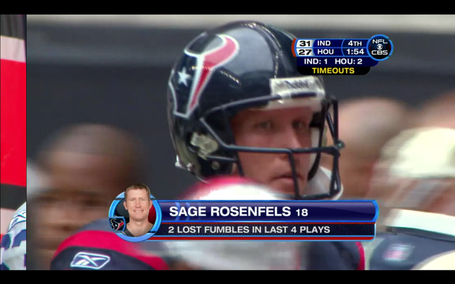 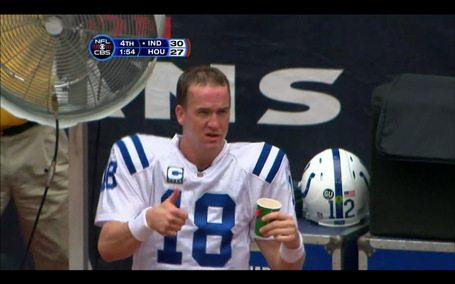 "So the twister party after the game is still a go, right?  Right?!?"

***Shortly after Reggie Wayne's TD to give the Colts the lead, a short video of Dallas Clark's new touchdown dance "The Wiggler" aired on the Jumbotron. Here are the reactions of several people who were in the stadium.*** 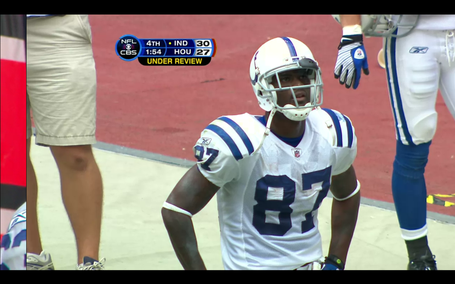 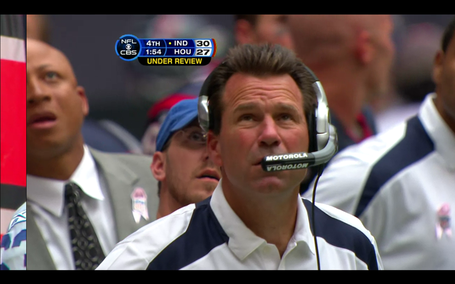 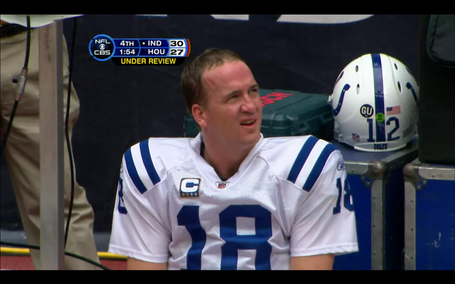 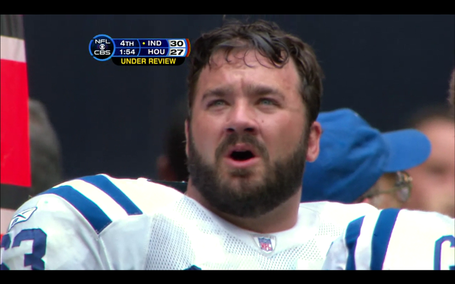