Share All sharing options for: TONIGHT ESPN to air Giants v. Colts 1958 Championship Game (aka, The Greatest Game Ever)

The 1958 NFL Championship game between the New York Football Giants and the Baltimore Colts is often called the greatest football game ever played. It was the first championship game to go into overtime, and one of the key moments that cemented the greatness of pro football in American society.

Tonight, ESPN will broadcast a re-mastered, colorized production of the game. The game is on at 9pm Eastern. Watch it if you can. And Go Colts! 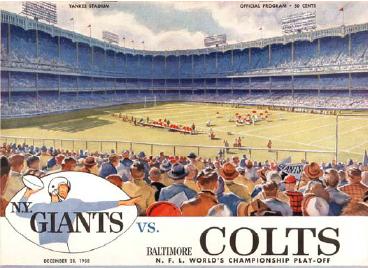