Lots of Colts hate out there

Share All sharing options for: Lots of Colts hate out there 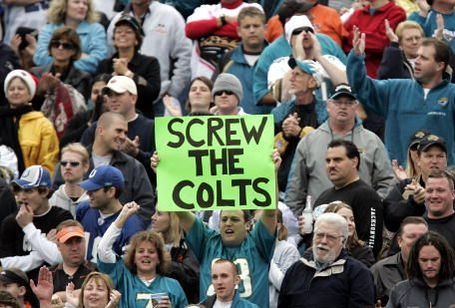 I'm a magnet for Colts hate. No really, I am. Part of it is my personality. For years I heard crap from Patriots fans about how my team sucked and how my QB was a choker and how the franchise was cursed and would never win a Super Bowl... blah, blah, blah.

I was tired of taking sh*t from fans who didn't know what they were talking about (at least, from my point of view). I started blogging on Word Press about the Colts, and then some guy from SB Nation found me and asked me to write for him and his network. I said, "Sure, sounds cool." Two and a half years later, this place is often my sounding board to take shots at people who dare question the greatness of the Colts. It's something that has endeared me to some, and chilled me to others. Winning the Super Bowl in 2006 was a license for me to get back at anyone and everyone who ever questioned Manning, Dungy, and the Colts. And I enjoyed every second of it.

This is just my personality folks. It is how I'm wired.

This year, I'm noticing a lot more anti-Colts blather than I've seen in recent years. Even when I or other Stampede Blue writers have gone to other sites to say "Hey, what's up? Let's talk football."  the reaction we are getting is "Screw the Colts!" I've responded by going through my typical routine and bashed those that bash my boys. This has, of course, incited even more hate. I've talked about it with other SB Nation writers to see if they have experienced the same things. I was wondering if I was just losing my mind, and the stress of the holidays was just getting to me.

To my surprise, they were experiencing it too.

My favorite line was from TheSportsGuru. He commented that certain teams that had finally experienced "the nuts of competitiveness" were using this one season of success to try and wipe away all the years of ineptness and losing their teams had suffered through. Other teams had everyone in the media stroking them and telling their fans how they would be the team to beat in the Blah-Blah-Blah Division. Those teams ended up sucking, and now their fans are angry and bitter.

Nothing hardens the sports fan's heart like false promises and losing seasons.

And then there was all the talk this off-season about how the Colts were going to suck. It seemed everyone had them on the list of teams that will slip. They were getting "old." They had legal troubles. Their "window" had closed. In reality, the people writing these comments were just tired of seeing Peyton Manning and company kick the crap out of their teams. They were hoping and wishing Indy would just go away, and after a 3-4 start their wishes were coming true. The Big Lead, back in October:

At 3-4, the Colts would still have to brace for New England, travel to Pittsburgh, and then play an improving Houston squad, one that always seems to play the colts tough. It doesn’t end there - road trips to San Diego, Cleveland and Jacksonville still remain. The end is nigh!

The problem for them now is Indy didn't go away, and has no plans anytime soon to go away. After winning seven straight and Peyton Manning poised to win his third MVP award, the false promise of the Colts sucking this year has made a lot of fans very, very bitter. Look no further than my botched Q & A over at Big Cat Country. There are a lot of angry, nasty Jags fans there, and typical me... I egg them on.

No, it is not the best way to deal with opposing fans. We've been batting back and forth with Titans fans all year, and the great irony of all ironies is that we seem to now have a common bond with (GASP!) Patriots fans now! Hell, I get along better with them than I do other teams' fans.

Does this mean that we, as Colts fans, HAVE BECOME LIKE PATRIOTS FANS! 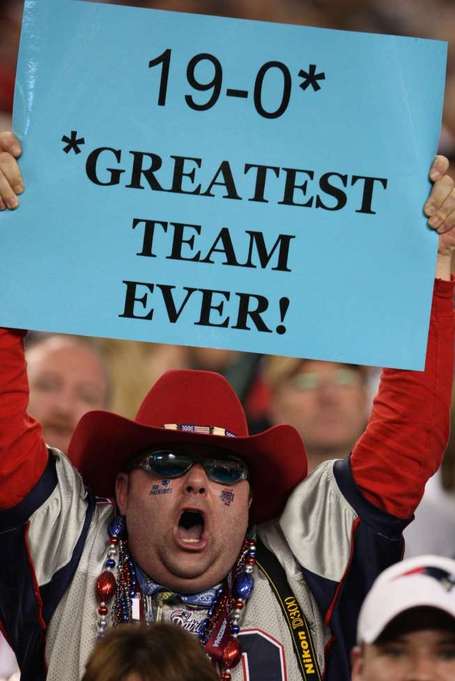 When we look in the mirror, is this what we see now?

I've pondered this for days, often forgetting to get real work done in the process. Then, it hit me. It hit me like Peyton throwing those footballs to those kids in hat SNL skit. In a way, yes. We are like Patriots fans now, but not how you think. Pats fans on the web are known for being very in-your-face about how they rock and you suck. Colts fans aren't like that. But, despite the differences, other fans from other teams that have not won anything treat them the same. Why?

So, instead of me getting mad or pissed that a Titans fan is here insulting our team, I guess I need to take that as a compliment. One of the reasons we get along with Patriots fans now is because our teams are now truly equal. Yes, there is Spygate and Belichick and all that crap, but no longer do you hear about the dominance of the Patriots. They certainly will not go down as the NFL team of the decade. The reason being that the team that has always been there with them is the Colts. And fans from other team cannot stand the winners. They wish and hope and pray that those teams just go the f*#k away, but they don't. They stick around and continue to kick other people's asses.

So, I guess what I'm saying in all this ramble is the view of the team has changed in the eyes of other fans, and I haven't noticed it. This team really has been the stadnard by which everyone judges greatness in the NFL. It really is. And if the Colts manage to win another Super Bowl in the next few years, the fan hatred towards our guys will only increase. This will force us, as fans, to adapt to how fans treat our team. And it may force me to chiiiiiiiiiilllllllll a bit.

Yes, there will still be the rants against dumb media who fail to recognize how NFL teams should be covered, but more so than any other time, I get the sense that our team has turned a corner. They are viewed totally different than they were two or three years ago. This is, of course, a good thing. and for over a year, I've failed to realize it.

No matter what happens this season, I really, really like this team. This has been one of my favorite Colts team's ever. Look what Bill Polian said about them recently:

We don’t play down to the level of our opponent. We have some flaws, as does every team in the league. Most of it is due to injury and some bad luck, particularly with the defensive tackles early in the year. We’re minus our two starting defensive tackles. We’re minus our starting middle linebacker. And at least for Sunday we were minus the Defensive Player of the Year (Bob Sanders) at strong safety). That’s going to affect your play. Offensively, we’ve been among the best teams in the league from about Week 4 on. That has not diminished at all. In the special teams area, we’re missing our principle return man (T.J. Rushing), who was a major force and actually won two games for us with returns last year. He has been gone since the third preseason game, so we are not the team we were a year ago. We’ve made up for it in many respects, because we’ve played hard and our coaches have done a good job of finding people to fill the voids and trying to maximize strengths and minimize weaknesses. We’ve had people like (safety) Melvin Bullitt and (running back) Chad Simpson and (running back) Dominic Rhodes step up and come to the fore and play very well for us. There’s no perfect team.

There has been no level of intensity that has changed. We have played, I think, our best every week.

Think of all that has happened this year, all the drama and all the injuries. Go back over it in your mind right now because I'm tired of listing it all. With all that has happened, most other teams would have packed it in. Heck, look at Jacksonville! Their injuries were very similar to ours and they are staring at a non-winning season while we are fighting to get into the playoffs. Look at teams like the Chargers, Browns, Bills, and Bengals. They all started the season with high expectations and were crushed by tough injuries. Yet, they were unable to fight through them. The Colts were. Incidentally, only one other team has had such devastating injuries (compared to Indy) and managed to fight through them like Indy. 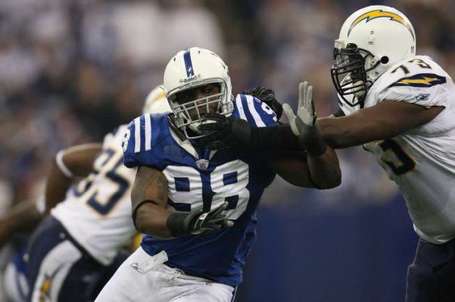 The Colts have fought and battled all season

Make no mistake, if Indy and the Patriots make the playoffs, it will piss a TON of people off. ESPN has no interest in New England without Tom Brady, and other NFL fans are tired of seeing New England and Indy march into an up-and-coming team's stadium and crushing them on national TV.

So, when you look back over this hurley burly year, no matter the outcome, I hope you have the kind of strong reaction to this team that I do. The football isn't perfect, but DAMN these boys fight! And it is because of their fight that I have some fight in me when people take shots at them. If my homerish posts and rough-around-the-edges attitude has rubbed you Colts fans the wrong way at times, I'm sorry. One of the reasons shake n bake, mgrex03 and others also blog here is to provide a different temperament. But please know that when I write what I write, the pathos behind my words is always the same:

I love my team, and I really, really want them to succeed.

I hope you like this team too. We are looked at in a new way now, and people like me are just starting to get used to it.