That is now the new, NEW catch phrase for this season. Why "Never Doubt" over "Mr. Manning, he just refused to let us lose?" Here is why:

Adam Schefter: Peyton, you started the season 1-2, you fell behind tonight 14-0. Was this game a microcosm of the season?
Peyton: Well, uh, I think it does say a lot about our team, about how we don’t quit, we fight back, very hostile environment, very emotional….
(Coach smacks Peyton on the back, and Peyton turns toward Coach)
Peyton (to Coach): What are you doing, man
Coach: Great job, great job. (shakes hands, leans in for hug)
Peyton: Way to go. Never doubt, right?
Coach: Never doubt. Hey, that’s a heck of a job
Peyton (to Adam): …um, and we just keep fighting, we keep believing. We feed off of each other. ….

The Archie Manning story is great, but it is specific to Peyton. And while Peyton is indeed the 2008 NFL MVP (if not, junk the award because it is meaningless if P doesn't win it) so many people on this team have stepped up at big times to win big games. Because this season has been about the resiliency of the team, Never Doubt works better. Big tip to Picky for transcribing the Manning interview last night.

I could write a chapter in a book on Peyton Manning's performance last night, but it was not just Peyton that came through for the Indianapolis Colts against the always chippy Jacksonville Jaguars. Yes, Peyton kept them in the game, making big throw after big throw to keep the Jags on their heels even though they led most of the game.

That last drive of 74 yards ended with Dwight Freeney DESTROYING Jacksonville's left tackle as he bulldozes his way to David Garrard for a sack. You know what, SCREW Albert Hayneswoth or DeMarcus Ware for Defensive Player of the Year. When they come up with big, money plays like that in big situations, you can put them in the Dwight Freeney category! Until then, take pleasure in the fact that Dwight Freeney is playing some of the best football in his life. He's been playing all-out from day one.

Sorry, but I have a big man crush on Dwight Freeney now.

On Garrard's last four drives of the night, he ended them with an incompetent pass, a pick 6 to Keiwan Ratliff, a sack, and a sack (which ended the game) respectively.

Now, I personally like David Garrard and I think he is a fine QB. This season is certainly not his fault, but that 4th quarter last night was epically bad for him. His INT to Ratliff was awful, but for us Colts fan it was justice because he threw an equally poor ball to Tim Jennings before halftime that Jennings SHOULD HAVE CAUGHT and run back for 6. The next play Jennings screwed up his assignment and let the Jags receiver catch an easy ball to set up a Josh Scobee FG. So, if you really look at it, Garrard threw 2 INTs for TDs last night, only one was actually caught and returned. It should have been worse for him, but the 4th quarter was where he truly melted down. 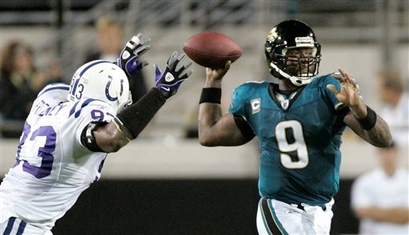 Raheem Brock and Robert Mathis also brought it last night, Brock in particular. His sack of Garrard at the 3:48 mark stuffed a promising drive for the Jags. They punted, and lost more time to catch up. Really, in all honesty, the game ended when Ratliff ran that TD back. Once the Jags lost the lead, they got desperate. They stopped running and started throwing every down. The Colts then pinned their ears back, licked their chops, and had a late dinner with David Garrard as the main course.

The giant elephant in the room for Indy after the game was their running game. They ran 18 times for 32 yards (1.8 a carry). Joseph Addai did not play, which left Dominic Rhodes to gut it out himself. Dom did a fine job. The Colts o-line did not. Now, in their defense, the Jaguars game plan on defense for this game was nothing short of moronic. Again, this is not a dig at the players. The Jags have some good ballers on D, but the scheme they ran last night was not one you run against Peyton Manning. 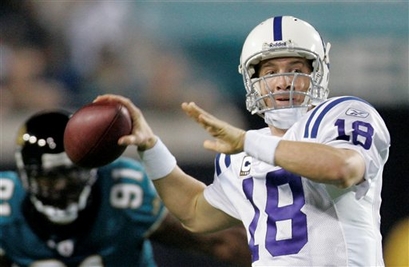 This man will kill your football team

The Jags had 8 players in the box most of the night. They crowded the line and refused to let the Colts run the ball. Why they did this, I don't know. You crowd the line against Peyton Manning and he is going to f@&king destroy you. That crap may have worked in Weeks 1-4 when Peyton was playing on one leg, but trying that junk now is like almost conceding the game. Crowding the line means slants and seam routes are wide open. Manning saw those routes, and completed his first 18 passes. He didn't incomplete a ball until the third quarter. Jack Del Rio: WTF were you thinking?

The bad for Indy in this game was the o-line, Tim Jennings in the second quarter, and Buster Davis. God bless, Buster. I like him and I think he can develop into a good player for this team, but last night he was awful. Dungy benched him to start the 4th. This moved Freddie to MLB, Tyjuan Hagler to WILL, and Clint to SAM. The result was a Colts defense that stoned the Jags offense.

For more on this game, check out Chris at Big Cat Country.