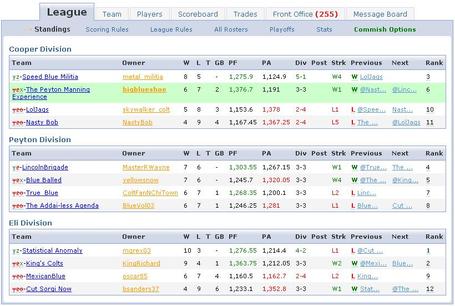 The Shakedown League just posted their update, and like them the 2008 FFL playoff field is set. And the team seedings went right down to the wire. Going into the final game, nine teams were fighting for six playoffs spots. Without question, the toughest division was the Peyton Division. Each team had at least 6 wins, and all four had a shot to win the division or get to the playoffs going into this week.

The #1 seed in the playoffs is mgrex30's Statistical Anomaly team. Take one look at mgrex30's roster and you have to ask yourself How the hell did this guy win 10 FFL games with THIS team? I mean, Darren McFadden, Dwayne Bowe, and Shaun friggin' Hill? But, this is why mgrex30 is the stats guru here, and he has clearly played the right people at the right time all thus far. The #2 seed is metal militia's Speed Blue Militia team, which had clearly ridden the Eli Manning and Deangelo Williams bandwagon all season long. Williams gave Speed Blue Militia 32 points this week. Both mgrex30 and metal militia have byes this week.

The winner of the cometitive Peyton Division was MasterRWayne and his LincolnBrigade team. To give you an idea of just how good this division was, the division leader coming into this week did not make the playoffs. Also, every single team in that division scored more than 1,240 points. Impressive.

The wildcard spots went to KingRichard's King's Colts (who had the second best record in the whole league, but just happened to play in the same division as mgrex30's 10 win team), yellowsnow's Blue Ballad (who closed the regular season winning 4 in a row), and... ME! That's right! I'm back from the dead, baby! Coming into the last game of the regular season, even though I had scored the most points of anyone in our league (1,376) I was on the outside looking in. But, I managed to win despite Peyton Manning giving me a whopping 2 points. My win coupled with a few loses by teams in the Peyton Division got me in the playoffs.

So, without further ado, here are the playoff games scheduled for this week:

You will notice that there are consolation games for the teams that did not make the playoffs. Yes, these games mean something as there will be a prize for the winner of the consolation bracket. I can't tell you what it is yet, but it is something. For the playoffs, my reward for sneaking into the playoffs is to play MasterRWayne while KingRichard and yellowsnow battle it out in their game.

I must say, this has been one of the more enjoyable FFL's I've ever played in. Thank you to everyone who has participated. Now, it is playoff time, baby!