Titans LenDale White continues to act like a prick

Look, we all know LenDale White is a fat, overweight, lazy punk who rode the coat-tails of Reggie Bush in college and is now doing the same with Chris Johnson in the pros. And throughout much of LenDale's pro career to date, he hasn't had CJ (which is why LenDale has, essentially, been a waste of space much of his career). This year, LenDale got his "scat back," his team has pulled off 13 wins so far, and he has used this opportunity to do what LenDale is really good at.

Earlier this year, we had LenDale saying the "Colts might not be good." Eight wins in a row later, we Colts fans enjoy making LenDale look like the stupid sh*t we know him to be. And we can only assume Steelers fans will also have a similar desire to force crow down LenDale's esophagus sometime in January after LenDale did this following the Titans win over the Steelers earlier today.

I don't think I need to point out the obvious, but I will anyway. I don't recall ever seeing players from the Colts or Steelers ever doing something like this after a big win. When Indy walked into Heinz Field and beat the Steelers, after the game they all shook hands, walked off the field, and started talking about their next opponent. It's how, you know, professionals act.

LenDale, apparently, hasn't learned how to do that yet.

Now, I'm sure some fans enjoyed LenDale doing this. We'll just dismiss those idiots for the pond scum they are, and leave it at that. Why waste words discussing them further? The best thing I can say to all this is that if LenDale plays in Week Seventeen against our beloved Colts, my hope is that the Colts hit him early, often, and really, really HARD. I'm no fan of the Steelers or the legion of followers, but I have even less regard for ain't-never-won-nothin' punks who disrespect opponents. And LenDale has done it all season long, pissing off many of his former fans at USC for his with his antics.

Say, isn't Jeff Fisher supposed to be a "classy" coach who believes in playing the game professionally? Why hasn't he disciplined LenDale for these kinds of actions? Could you imagine if someone did this on a Tony Dungy coached team? Could the reason Jeff Fisher hasn't disciplined LenDale for acting like an ass is because Jeff Fisher is completely and totally full of sh*t? Mmmmmmm, yeah. Yeah, I think that's it. Think of this next time Fisher talks about the "character" of his football team. Try not to laugh too loud.

Since LenDale is and likely always will be a mediocre back who isn't worthy enough to clean Pittsburgh's stadium's toilets, let alone talk smack about that great franchise, we can only assume LenDale acts this way because he has a very, very small penis.

That is all. Go Colts! 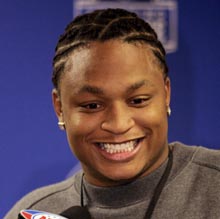 Yes, Mr. Reporter. That's right. I act like an ass because my penis is very, very small. Now, which way the buffet?