All week leading up to the game, folks like me spent a lot of time calling out the Tennessee Titans and their coach. They acted like immature punks following their win over the Pittsburgh Steelers last week, and spent most of the week prior to this game running from their actions like cowards. While the final regular season game between the Titans and Colts was meaningless in terms of playoff seeding, I gotta say:

It felt damn good to see our guys kick their butts up and down Lucas Oil Stadium for 4 quarters.

Oh, and I hope you noticed that after the Colts used the Titans as their own personal play thing for those 4 quarters, they didn't take a "Titans Towel" and start dancing on it. When they gun sounded, they shook hands, left the field, and started talking about the playoffs. This is what mature, professional teams with long standing, winning traditions do. They don't mock the opponent. They don't act like children making fun of the dorky kid in gym class. They don't act like brats. What they do is act like they've been there. They act as if the expect it.

Here (just to show those who don't know) is how real men look and act when they win: 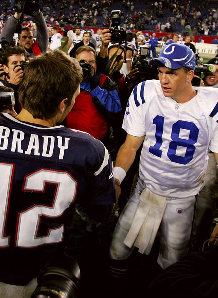 Now, onto the game itself.

Unlike the laughable posturing of Jeff Fisher throughout the week (when he fooled his own fanbase into thinking he'd play his starters in a meaningless game), Tony Dungy made it clear he would sit several starters going into the game. Peyton Manning played one series. He went 7-7 for 95 yards and a TD. That TD was a 55 yard catch and run by Joseph Addai, who finally looks healthy. Addai outran the entire Titans defense, including Cortland Finnegan. The Titans then get the ball. Against a defense minus Dwight Freeney, Robert Mathis, and Bob Sanders, the Titans go three-and-out. Though Tennessee sat Chris Johnson today, they still had LenDale White, Kerry Collins, and most of their starting offense. But, even with great field position, they went three-and-out, punted, and Indy got it back. Jim Sorgi was now the QB, and came out throwing the ball well. He guided Indy to a Adam Vinatieri FG, making it 10-0.

Then, Tony Dungy showed that he wanted to win the game early.

The Colts executed an onside kick with 15 seconds left in the first quarter. The Colts got the ball and tacked on another FG. At this point it is 13-0, and Kerry Collins' day was done. Fisher starts pulling starters despite his saying all week that the Titans would "play to win." Fisher's attitude about the game did not sit well with Titans fans.

fisher can talk about "playing to win" to the media during the week before the game all he wants, but that’s not what happened on the field today. we looked like the cardinals in the snow in new england effort-wise.

The biggest disappointments were losing like that to our greatest divisional rival, and having Fisher misrepresent his intentions. He clearly didn’t give a shit about winning the game and he should have actually prepared for it instead of giving everyone the day off for Christmas and phoning in a gigantic egg.

The rest of us laugh because if you believed Fisher during the week, you were a bit naive. He and the Titans wanted to get in and out of this game ASAP without any major injuries. They could have given a rat's ass about winning it. And what they ran into was a highly motivated Colts team that wanted to stick it to them. After the game, Fisher all but admitted the Titans did little game-planning or preparation for the contest:

"[The Colts are] playing very, very well, but there's a chance we may play them again, so we just lined up and played today," he said.

The Colts tacked on another FG before halftime and a fourth quarter TD to ice the game. Even though most of the game featured a battle of back-ups at key positions, the Colts defense played very well. Rookies Marcus Howard and Curtis Johnson generated good rush from the DE positions, causing 2 sacks and a forced fumble. Tennessee's run game was non-existent, and their defense was pushed all other the field by a kid activated off the practice squad named Lance Ball. Ball had 83 yards on 13 carries. 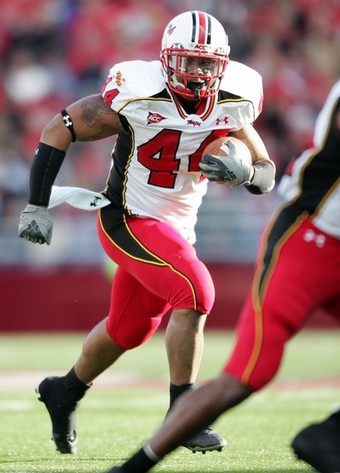 The other tiny element to this game was the Vince Young "factor." Vince played a bit in this game, and looked truly awful. In fact, he looked so awful he was yanked. Yes, the once "great" Vince Young was yanked in a meaningless game he didn't even start in. Vince has fallen very far, and I think his career in Tennessee is over. We'll see.

During and after the game, the Colts achieved some truly amazing milestones:

For a Titans fan's take on the game, please`check out Jimmy at Music City Miracles. I may say harsh things about their coach and some of their players, but they are a much improved team from last year. They deserved to win the AFC South, and have had a magnificent 2008 regular season.

For us Colts fans, all in all, this was a wonderful ending to a very roller coaster-like 2008 regular season. As we have seen over the years, starting is important, but finishing is vital. The Colts finish this regular season winning nine straight games. They've beaten New England, Pittsburgh, San Diego, and Tennessee. They have the soon-to-be-or they-better-not-have 2008 NFL MVP in Peyton Manning. After a 3-4 start, this team has risen up and come together. This is why no matter what happens in the playoffs, I'm proud of this squad. This has been one of my favorite regular seasons ever. Next week, the new season begins, with a new tempo and higher intensity

But for now, enjoy and relish in what these guys have done this 2008 regular season. Never doubt.