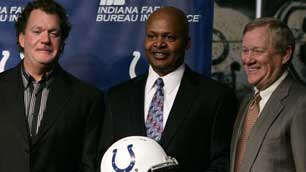 When all is said and done, new Colts head coach Jim Caldwell will be judged as a head coach by wins and loses. But, in order to get those precious wins in the NFL, one has to win over the team and the fans. In his first few days as coach, replacing the immortal Tony Dungy, Caldwell has made the rounds on radio shows, TV, and press conferences. He's had to answer the question "How are you and coach Dungy similar?" about a billion times. But, with each answer he gives, Caldwell has begun to build up excitement with fans. As I said following his introduction, Caldwell strikes most as a very composed, articulate, knowledgeable man who commands respect. Is he Tony Dungy? No. He has made that abundantly clear his first few days on the job. But does he seem to have Dungy's uncanny talent as a leader of men?

Yes, it certainly seems so.

Caldwell has already won me over. I reserve judgment on how affective he is when it comes to winning, but as a person he has conveyed strength, intelligence, humor, and a willingness to be his own person. Caldwell is not Tony Dungy-lite. Caldwell is Caldwell, and nothing made that point stronger than his recent "firing" of long-time special teams coach Russ Purnell yesterday. Well, it wasn't really a firing, per say. Purnell's contract was up, and they just decided not to renew it. But, it certainly feels like a firing. Tip to jumunjis.

I will give Purnell some credit for improving the Colts kick and punt coverage this season. DVOA ranked coverage near the top of the league, but I think that had more to do with Adam Vinatieri getting in great shape and booming his kickoffs. Also, adding Pierre Garcon, Buster Davis, and Marcus Howard to the mix helped. Throughout Purnell's tenure as special teams coach, the Colts always hovered between mediocre and awful despite the fact they drilled special teams play all the time. In training camp, there were entire practices in the afternoon dedicated to special teams. Yet, despite all the work, the unit marginally improved.

Most of us have been begging the Colts to fire Purnell for years, but the rumor out of Indy was that Dungy couldn't do it because of loyalty. Dungy never liked to fire coaches, especially coaches he was close to. But in Purnell's case it was loyalty to a fault. Unlike Dungy, Caldwell seems to have no problem dumping bad or ineffective coaches. Thus, Purnell is gone. No word yet on his replacement. Special teams will get extra special attention from us this year in Terre Haute as we watch to see if this unit improves under a new position coach.

The other coaching change was not a firing, but one out of necessity. With Caldwell assuming the head coach position, his old position of QB needed filling. Enter Frank Reich, who has worked for the Colts last year as an offensive assistant. 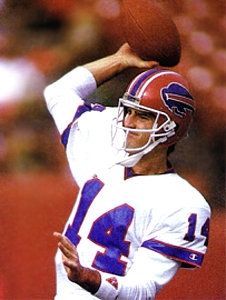 Frank Reich, new QB coach for the Colts, during his playing days