Hall had another injury filled season appearing in only 4 games and setting a franchise record for most times a commenter call for him to be cut, but the Colts continued to show confidence in him. Hall started and ended the season as Indy's #4 WR and wasn't IR'ed despite suffering a knee injury that cost him over half the season even though roster space was often tight. 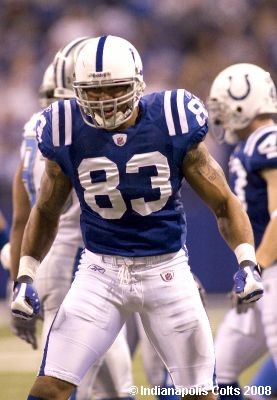 Hall is still a project who made his way onto a NFL roster because of his size and freakish athleticism. The Colts obviously still love his potential as a WR and contributions on special teams.

Unlucky may be a better description of Halls first two seasons than Injury prone. A special teams collision that left the other player temporarily paralyzed and Hall concussed with a serious shoulder injury cost Hall the last 13 games of his rookie season. A knee injury in the opener was expected to cost Hall at the very least a month after arthroscopic surgery on the knee. Hall returned to practice 3 months later and played the following week.

Hall could end up on 3 career paths. He could realize his potential and be a force at WR. He could continue to get injured and end up out of the league, or the one I feel is most likely, he'll be a great special teamer and a mediocre, depth WR for as long as his physical skills remain great.