To describe the playoffs as "wacky" this year would be an understatement.  Both number 6 seeds are still alive, the Cardinals are hosting the NFC Championship, a rookie QB has the chance to play in the Super Bowl, and the team with the quarterback that's been sacked 46 times this season is currently the favorite to win it all.  If you're playoff pool isn't completely ravaged, I'd like to consult you for lottery advice.

Pros: It would be fitting to see a product of the Tony Dungy coaching tree win a Super Bowl the year that he retired.

Oh, who am I kidding, we all know who we're rooting for this week. 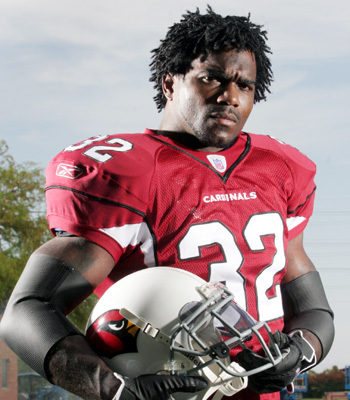 The Colts all-time leader in rushing yards and rushing touchdowns, 1/3rd of the triplets, one of the best teammates that Peyton Manning has ever had (according to Peyton), and the only great Colt that wasn't a part of the team that won Super Bowl XLI.  Sure, he got a ring from the Colts, but when he gets inducted into Canton, that sign of appreciation won't be on his list of honors.  Edge wants the real thing this year, and as a fan, I'm behind him 100% in his quest to get that ring.

Just in case you need a reminder of the kind of beast that Edgerrin James is, this you help catch you up:

James also has otherworldly stamina, as evidenced by his post-Denny's behavior. Despite having been up for 20 straight hours, James heads back to his apartment, hooks up with a fresh set of friends and shoots pool for another five hours. Finally, at 4 p.m. he takes a four-hour snooze that's interrupted by a dozen phone calls and 26 pages. Then he showers, dresses and gets right back in the mix.

Just after 11 p.m. James enters the fitness center in his apartment complex, surveys the empty room and smiles, revealing his five gold teeth. "A lot of times I come down here to work out between 2 and 4 a.m.," he says. "I call it getting right while the haters are sleeping.

Don't nap on the Cardinals.