Happy MLK Jr. Day- Something to think about

Share All sharing options for: Happy MLK Jr. Day- Something to think about

Today, we celebrate the greatness of the reverend Dr. Martin Luther King, Jr. Tomorrow, our country will swear in its first black President. On the football side, here is something to chew on: Yesterday, Pittsburgh Steelers coach Mike Tomlin (a young black man at age 36) became the third black head coach to make a Super Bowl. Do you recall any media making a big deal about this?

Flash back to two years ago, when Tony Dungy and Chicago's Love Smith became the first black head coaches in a Super Bowl. Remember what Dungy said when asked about the significance of the event? Well, he pretty much echoed the sentiments of former Boston Celtics great Bill Russell:

"My hope is that someday soon we will get to the point where no one notices the ethnicity of winning coaches, but rather the merits of their success."

Again, Mike Tomlin (a black man) coached his team to the Super Bowl yesterday, and I don't recall the media making a big fuss over the fact that he is, indeed, black. They just simply called him a great, young head coach. 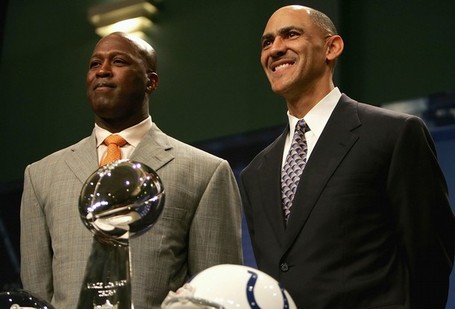