It was apparent to us for some time. For the people who actually voted on this award, it thankfully seemed equally apparent to them as well. Peyton Manning won the 2008 NFL MVP award in a landslide, grabbing 32 first place votes. Peyton was the obvious league MVP throughout much of this season, and thank goodness most of the established media voters saw the obvious.

Oh, and sorry Greg Cote, resident moron at the Miami Herald. But the national writers voting for Peyton Manning for MVP was not "a march of the lemmings." They voted for him because it was obvious he was the league MVP. You were just too stupid to see just how obvious it was. Next time, show some objectivity, and stop marching to the homerific Dolphins drums yourself that have robbed you of your reasoning. No disrespect to Chad Pennington, who very much deserved his second Comeback Player of the Year award in his strong, resilient career, but Greg Cote is a big, fat idiot for suggesting a vote for Manning was a mindless and "safe" pick.

Peyton is the third player in NFL history to win three league MVP awards. Former Packers and current Jets QB Brett Favre (who won three in a row) and Browns legend James Brown have won it thrice. Brown is in the Hall of Fame, and Favre will be a first ballot HoFer when he retires.

When all is said and done, this award (along with the other awards and accolades Peyton has built up over the years) will continue to cement Peyton's legacy as arguably the greatest QB to ever play the game. Sure, there will always be some doubters and some haters. But, with Peyton winning his third MVP, these sad, silly little fools are now more easily brushed aside. With every new thing Peyton wins, more and more Peyton haters are tossed into the fires of irrelevancy year after year.

So, take a bow, Mr. 2008 NFL MVP! This was one of your greatest regular seasons ever. Take a bow, I said! And when you are done taking that bow today, Go Colts! 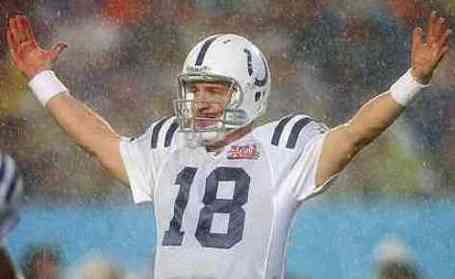