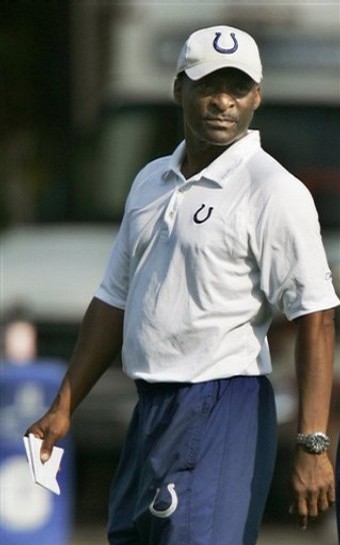 Hope everyone had a nice, long weekend. All we've been doing since Saturday is shifting through various rumors and reports from various characters like Chris Mortenson and Mike Florio. I personally hate posting rumors. Whenever I put them up, there's always about a 75% change that they are bogus. I get everyone's hopes up (or down) when I post them, and then when they turn out to be false I feel like a prick for promoting them in the first place. Remember Peyton Manning saying Dungy was returning?

That said, I will go out on a limb with these rumors because they sniff true. These rumors say long-time Colts defensive coordinator Ron Meeks has been fired. Rumor also says his replacement is the soon-to-be-fired Kansas City Chiefs head coach, Herm Edwards.

There are some oddities to these rumors. One, Edwards has never been a coordinator in the NFL. Ever. He was the Assistant head coach and defensive backs coach in Tampa Bay before he landed the NY Jets head coaching job. Prior to Tampa Bay, Edwards was not a coach! In fact, he was not even pursuing the career track. Edwards worked in KC's personnel department as a scout before he came to Tampa Bay. Edwards maintains the only reason he came to Tampa Bay to coach was Tony Dungy.

So, when you really look at it, Edwards is really an accidental head coach who is about to leave his second team after a losing season. Edwards as a defensive coordinator could work, but there is nothing to suggest he'd be better than Ron Meeks, who has been a DC for seven years and has a Super Bowl ring.

Now, I know there are many people here who would LOVE to see Ron Meeks booted. I am not in their camp. The Colts defense has always played hard under Meeks. Players like Freeney, Sanders, Mathis, Brackett, Jackson, Bethea, June, Thornton, Doss, and Hayden thrived under Meeks' guiding hand. Now, if Meeks has indeed been let go, it confirms (at least for me) that Tony Dungy was the driving force behind the defense, not Meeks. And as we have seen recently from Jim Caldwell, he is not tolerant of incompetence. Dungy is a forgiving man. He nurtured his coaches. Caldwell may also do some of that, but he is clearly less tolerant of ineptness.

In one recent interview, Caldwell quoted an unknown poet who said this:

Excuses are tools of incompetence that build monuments of nothingness and those that insist upon using them are seldom good at anything else.

If Caldwell fired Meeks, it is likely because he was tired of excuses. It is also possible that Meeks was fired because, quite frankly, the players don't care for him. We've often heard players praise Gene Huey, Howard Mudd, John Teerlick, and Tom Moore. I have never read anything where a current or former Colts player praised Ron Meeks.