This piece by ESPN's Sal Paolantonio is such a rare combination of stupid, wrong and biased I have to emulate the late great FireJoeMorgan.com to properly present it.

(Warning: this piece upsets me so there will be a some profane language, not a ton, but filter is off. Oh and it's forever and a day long too)

[UPDATE]: After reading this total and complete beatdown of Sal Putzantonio, kindly give our man shake and bake some applause-- bbs:

Sal Paolantonio examines the most overrated Superbowl Winner in history

First off comparing teams that played in different years is difficult to do in any kind of meaningful way and if even if the methodology doesn't suck then your results are still aren't that meaningful. Stat-geeks and stat-haters alike can agree on one thing, football (and other sports) aren't played on paper (or in a spreadsheet). What a statgeek like myself will say is that there's plenty to be learned about what happened in a game on paper. It's possible to delve into why what happened, happened, on paper. Insight to future games can be found on paper. But the games aren't played there, which is why stuff like best/worse or (the most nebulous pointless-debate stirring word in sports) overrated, teams in history is pointless and unanswerable.

There will always be that final scene in Miami of Tony Dungy and Peyton Manning, the NFL's two lost souls, finally finding their way to the promised land of pro football immortality -- hoisting the Lombardi Trophy, awash in multicolored confetti and, on this night, an unrelenting southern Florida rain.

Dungy, who lost his son James to suicide in 2005 and who had labored like a gentleman farmer in a sallow field of missed opportunities, became the first black head coach to win an NFL title.

Manning, fast becoming defined as a shameless corporate pitchman who happened to put up the biggest numbers of any quarterback in a generation, finally validated his place in the record books -- shedding the Dan Marino label for the John Elway legacy.

"Happened to put up the biggest numbers of any QB in a generation"? I didn't realize the Peyton just fell out of bed and just randomly tossed out 49 TDs in a season and that it was just a fortunate accident that made him the most valuable QB (by DYAR) for each of the 4 seasons preceding SB XLI (as well as in 1999 and 2000)

And it is that image and those significant milestones that threaten to overshadow one undeniable conclusion: Super Bowl XLI, between the Indianapolis Colts and the Chicago Bears, was the worst ever. 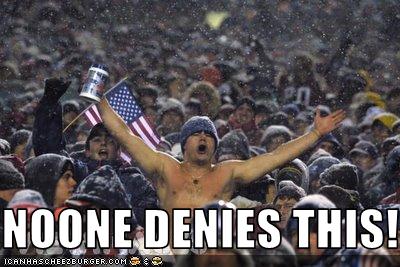 (Thanks to KSK for the original image and meme)

It was a washed-out disappointment between two football teams that came into the game with very high expectations and -- in most cases on both sides of the ball -- could not have lived them down any worse.

Let's start with the biggest star of the game -- Manning. He came into Super Bowl XLI with a QB rating of 101.0 for the 2006 season, having thrown for 31 touchdowns with only nine interceptions.

That Manning kid is pretty good.

Wait, wait, wait. So they aren't even the worst Colts team to win a superbowl, but they are the most overrated? This is where "overrated" allows someone to slip around and move their position. Sal isn't saying the 06 Colts weren't good enough to be a Superbowl winner, he's saying they are "rated to highly". That the team in whatever subjective measure he feels like, is too high and needs to be put down. His purpose in the piece is simply to put down the 2006 Colts. He doesn't have a standard to measure them against, he's not arguing a concrete spot. He just feels the need to say bad things about those Colts.

In Super Bowl XLI, Manning was pedestrian. He opened the game with an interception and then dinked and dunked his way to a championship. It was a boring performance.

Sal is right Indy should have aired it out in a downpour against an elite D running a scheme designed to protect deep. That would have kept Sal interested.

Of course, you can blame the rain. Yet four times Manning had great field position, but the offense stalled, failing to get into the red zone. His conservative approach kept the Bears in the game.

The Colts had 5 possessions that ended outside the red zone. They started at the Indy 30, Indy 16, Chi 43, Indy 35 and Indy 32. So according to Sal Pal starting anywhere from your 30 on out is great field position and it's a failure if you team can't drive the remaining 40 yards to the redzone. Forget that only Indy averaged more the 34 yards per drive that season and that 19 teams average starting position for the whole season was by Sal Pal's definition "great". Also don't remember that one of those drives was ended by a tipped ball interception and another by botched handoff. Finally do your buddy Sal a solid and don't remember that Indy was up against a team that had won the NFC on the strength of it's defense, ranked 2nd in DVOA, 3rd in Points.

Indianapolis should have won by 30.

Huh? The are overrated because they should have won by more? If the game was closer than the two teams talent levels would dictate then wouldn't that mean Indy is underrated? Indy was favored by a touchdown, and the Bears were getting more of the bets.

Sal had a much higher opinion of the Colts than Vegas or the betting public. Is he the one overrating them? Then why is he writing an article saying they were overrated? Does he have split personalities? Did he overrate them then, just so two years later he could say that they were overrated?

In Super Bowl XLI, the MVP should've been Colts running back Dominic Rhodes, whose 21 carries and 113 yards kept the Colts' offense on schedule while the normally potent passing game slogged unceremoniously through the soggy night.

The Colts are overrated because the SB MVP went to the wrong player?

Rhodes had a great game, but he split time. Joseph Addai started the game and actually had more total yards. 77 on the ground along with 10 receptions (a SB record for a RB) for 66 tards. Peyton won because the RB's performed relatively equally. Neither was mostly responsible for the Colts running game .

The Colts' offense just had no rhythm -- right from the start. Take Manning's interception. It was on a play that the Colts had run all year, had practiced all week in Miami, knowing that the Bears' Cover 2 defense would be vulnerable to it. The play called for tight end Dallas Clark, who had been the Colts' leading receiver in the postseason because Marvin Harrison was getting double-covered so much, to run a seam route underneath the Bears' safeties. But Clark broke too far to the inside, giving Bears middle linebacker Brian Urlacher a chance to get his giant paw up and deflect it -- interception.

The Colts are overrated because they didn't play up to their Sal appointed ability?

After the game, Manning pinned the blame for the interception squarely on Clark. But a study of the game film shows that Manning clearly had time to pull back on the ball. He threw the pick.

A tipped pass interception on a bad route is Peyton's fault because he didn't have to throw the ball at that time/place? Well yeah, you could say that about any interception. Peyton Manning could have pulled the ball back down on the pick that Kenton Keith tipped into the air for a Eric Weddle interception. Did he still "throw the pick".

And Manning's only touchdown pass? Reggie Wayne was wide-open because of a major breakdown in the Bears' secondary -- something Chicago had avoided all season. Free safety Danieal Manning was in man coverage while his teammates were in a zone. Manning to Wayne for 47 yards was the MVP's only touchdown pass of the night -- from the game's most prolific passer.

Time now to talk about the other quarterback. After his performance in Super Bowl XLI, Grossman did not quite achieve Steve Bartman status in Chicago, but he came pretty close. Rick Reilly put it best: Grossman "seemed to be playing in ski boots and oven mitts."

The numbers are obvious: one fumble lost, two interceptions. But it was more than that. Grossman's general inability to generate any offensive momentum was demoralizing to a Bears defense that was playing well enough to keep Chicago in the game.

I thought it was Peyton Manning's conservative "let's not air it out in the pouring rain against a defense with 3 players in deep coverage" gamecalling that was keeping the Bears in the game, not the Bears Defense. Now you are telling me that D was like good and shit?

About halfway through the third quarter, the Bears trailed by only five points, 19-14 -- despite Grossman's awful play. Chicago had a first-and-10 on its 46-yard line. Great field position.

As the field began to resemble some kind of southern Florida swamp, Bad Rex surfaced like some B-movie beast to snatch the Bears from a possible comeback. He trips, loses 11 yards. He muffs the snap. The ball squirts backward. He falls on it. Loses another 11 yards. On fourth-and-23, the Bears wisely punt.

Only 34 more yards (longer than any team besides Indy's average drive that season) from the redzone. Fantastic field position.

The Colts are overrated because the best team in the NFC that year had a bad QB who played a awful game?

But then Bears coach Lovie Smith missed another obviously wise move: remove Grossman for Brian Griese. That was at 5:36 in the third quarter. From that point on, the Colts' offense managed just three points, one Adam Vinatieri field goal. The rest of the Indianapolis scoring was provided by Grossman.

You mean the Brian Griese who had thrown two picks in his 32 attempts that year? There's no way he could have thrown two in 28 attempts like Grossman did in that game.

He threw two interceptions. One wobbly pass that looked like a punt was snagged by reserve cornerback Kelvin Hayden, who returned it 56 yards for a touchdown.

Yeah, where's that guy now. What? He's a two year starter and about to get a big contract? Well it's not like he did anything on that play (besides, you know, not biting on the pump and go route the Bears had going against him).

Sal is right back to giving no credit to the opposing defense after initially giving none to either side on either team. Then ignoring the Bears D when talking about Indy's O struggling. He moved on to praising the Bears D to further bash the Bears O. Now it's back to no credit for the D, when discussing the Bears O's struggles.

Let me count the things horribly wrong with this statement

Just awful, this shit is why I don't read ESPN for analysis.