Share All sharing options for: Another possible defensive coordinator candidate 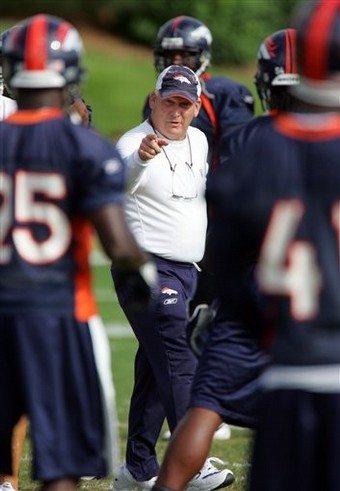 Yesterday, we ran down the list of possible defensive coordinators in wake of Ron Meeks resigning. One name I'd like to toss into that bag of candidates is former Buccaneers assistant head coach Larry Coyer. You all might remember Coyer when he was the defensive coordinator of the Denver Broncos. He ran a Cover-2 scheme in Denver and the results were very positive. From 2003-2006, Coyer's defenses in Denver ranked in the top 7 overall, surrendered an average of 93 rushing yards a game, and gave up an average of 18 points per game. His downfall in Denver involved two people: Mike Shanahan and Peyton Manning.

My opinions on Shahahan are well known to Denver fans, and many of them hate me for it. He was one of the most over-rated coaches in football, and his firing a few weeks ago was LONG overdue. Shanahan knew next to nothing about coaching defense and often pointed the finger at others when things went bad rather than manning up and accepting responsibility for his own stupidity. Guys like Ted Sunquist (former GM, fired by Shanahan), Jim Bates (former assistant head coach, fired by Shanahan), and Coyer (former Broncos DC, fired by Shanahan) are all examples of Shanny sacking his subordinates rather than accepting personal blame.

In Coyers' case, the proof is in the pudding, so to speak. Denver's defense was a top 10 defense when he ran it from 2003-2006. Since he has been fired, Denver's defense has become a laughing stock. The excuse Shanny used to fired Coyer was the performance of the Denver defense in the playoffs against Peyton Manning, and their supposed "collapse" at the end of the 2006 season.

In 2003 and 2004, the Broncos had the unfortunate luck of facing Peyton Manning and the Colts in the first round (both games in Indy). Those two games were blow outs by halftime, and in many ways exposed the glaring coaching deficiencies of Mike Shanahan. The reason Denver failed so miserably in the 2003 and 2004 playoffs is because Denver's Cover-2 defense had ZERO pass rush. As we Colts fans can attest to, a good, well-coached Cover-2 can help you get to the post-season, but if you do not have a pass rush-- you are dog meat.

Shanny's answer to the pass rushing personnel problem was to sign draft busts Courtney Brown and Gerrard Warren from Cleveland. All Coyer did was take these losers and coach them into solid players. But, "solid" players do not help generate pass rush in the playoffs. You've got to have game breakers rushing your opponent's passer. But with so much money tied up in CB Champ Bailey, finding a great DE was not an option for Denver.

Again, rather than owning up to the personnel failures himself (Shanahan had complete control over personnel), he simply fired his coordinator following the 2006 season. Since then, Denver has gone through a series of horrible defenses, ranging from Jim Bates' out-dated "Two Fatties in the middle" defense to the "WTF" scheme they ran last year, which surrendered 28 points per game.

After Coyer left Denver, he ended up in Tampa Bay as Jon Gruden's assistant head coach and defensive line coach. He did an admirable job there, replacing Ron Marinelli a d-line coach, and working with another highly over-rated coach in Gruden. Small side note- It is fitting that both Gruden and Shanahan were both fired in the same year. It is also fitting that both these boobs will not be coaching in 2009. If the NFL never sees these clowns again, it's a good thing.

With Gruden now gone from Tampa Bay, Coyer is out of work. He is 66 years old, but if he is brought in here it is because Caldwell and Polian respect his ability to coach and teach. He has a proven track record, but has worked for some crappy bosses the last two jobs he has had. Maybe a change of culture (and a pass rush) would work for him.

Now, I await the flurry of Broncos fans who will no doubt call me a jack-ass and insult my mother. It's ok. If Peyton Manning owned my team the way Manning owns the Donkeys, I'd hate the Colts blogger too.