It's been a busy two weeks for us Colts fans

Share All sharing options for: It's been a busy two weeks for us Colts fans

We're not used to much chance around here. It's typical for our state and, for the last seven years, it's been typical of our football team. For seven years we've had the same head coach, defensive coordinator, defensive line coach, QB coach, and special teams coach. For the last eleven years, we've had the same offensive coordinator and offensive line coach.

Within the last two weeks, we've seen so much change it almost makes my head dizzy.

But for those who know me outside of Stampede Blue, they know that I am always of advocate for change. Change is good. Sometimes, change for change's sake is warranted. It is the natural progression of things. As fans, we tend to hold on to what we know and love; our memories. So, when we see our future Hall of Fame coach leave us, there is a bit of sadness.

But in Indy's case, our beloved Tony Dungy has been succeeded by a man who takes a similar approach to job, but with his own points of emphasis. For me personally, Jim Caldwell's first full week on the job as head coach of the best franchise in the NFL has been impressive. From minute one of his press conference, you could tell he commanded respect. This was further reinforced by comments from current and former Colts players (like David Thornton):

"[Jim Caldwell's] a guy who I have a great deal of respect for," said David Thornton, the Tennessee linebacker who jumped to the Titans from the Colts as a free agent in 2006. "He's very similar to coach Dungy in his style, his personality, his ability to relate to players.

"He's a man of faith, a man of integrity, definitely an intelligent coach. Guys will definitely respond well to coach Caldwell. He's not a guy that's closed off, he interacts with all players, so I really see him fitting well."

That is a very telling quote from Thornton for two reasons. One, Thornton is one of the good guys in the NFL, and the best LBer the Titans have. Two, he is a defensive player. When Thornton was in Indy, Caldwell was the quarterbacks coach. So, this is a player who had very little, if any ,interaction with Caldwell on a daily basis. He wasn't his position coach or his coordinator. But, Thornton was very impressed with Caldwell, watching him from afar as a player for Indy and for Tennessee.

Even legendary coaches like Penn State's Joe Paterno, who Caldwell used to work for back in the early 1990s, have great things to say about him:

"Jim Caldwell was one of the best assistant coaches I've ever had at Penn State," Paterno said through the university's sports information office.

Joe Pa has been coaching since Julius Caesar got Slap Chopped by Brutus and his pals over two thousand years ago. So, for him to call our new head coach one of the "best assistants" he's ever had at Penn State is a pretty big deal. 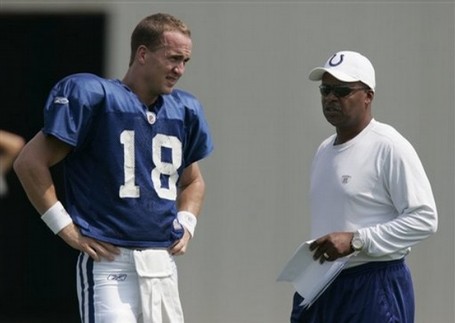 So, after watching player reaction and league reaction to Caldwell's accent to the head coach position, it is pretty clear that people respect him and trust him as their leader. These qualities are essential if you want your team to win consistently. Recall that a lack of faith and trust exposed Jon Gruden for a putrid coach he was in Tampa Bay. The other trait Caldwell seems to possess, and the theme he sells to his coaches and players, is accountability.

Excuses are tools of incompetence used to build monuments of nothingness. Those who use them seldom amount to anything?

It is interesting that just a few days after Caldwell went on Colts.com and used that quote to stamp his head coaching style, both long-time special teams coach Russ Purnell and defensive coordinator Ron Meeks were (essentially) fired. On the surface, these actions may seem like significant changes to the team's core winning strategy. For those that simply don't know the Colts, it could seem like the mantra of "things will continue as normal" rings hollow. However, if you know the Colts, you know these changes were long overdue. And losing both those coaches was more like cutting away fat rather than losing quality assistants that were keys to the team consistently winning.

It seems that pretty much everyone associated with the Colts, from the folks at West 57th street to us true blue faithful on our little website, knew Russ Purnell was a horrible special teams coach. When he was not re-signed, there was nary a peep from Colts veterans like Adam Vinatieri or Hunter Smith. For years, Colts special teams kickoff coverage and returns have been dreadful. Even with special emphasis placed on special teams play at training camp, the unit still did not significantly improve. Many seemed to know that it was Dungy who really coached the special teams, but with his focus on so many other things, he could not give it the special attention it needed. Again, that is what position coaches are for, and Purnell failed in that task repeatedly.

Ron Meeks also failed, to an extent, with the defense. While the Colts have always been known to play tough, fast, high energy defense, the fact of the matter is most of the coaching for the defense came from Dungy, John Teerlick, Alan Williams, Mike Murphy, and Leslie Frazier (when he was here as a special assistant). If you want to know just how the Indy brass felt about Meeks, contrast his departure with Frazier's. When Frazier left to become a successful coordinator with the Minnesota Vikings, Colts President Bill Polian made it a point to say this:

"We had the privilege of Leslie serving with the Colts for the past two seasons. Leslie is a dedicated teacher who relates very well with players. Leslie was a big contributor to our success since he has been with us. This is a great move by the Vikings, and the organization will benefit from Leslie’s talents."

The Big Red Head does not pass out compliments like that too often. Now, compare that with Polian's statement about Ron Meeks after Ron "resigned" his position after seven years on the job:

I've scoured the Internet for anyone, ANYONE (be they player or coach), who has one thing nice or positive to say about Ron Meeks. And when he "resigned," not a peep from the players. For Dwight Freeney, Robert Mathis, Bob Sanders, and Gary Brackett, Meeks was the only defensive coordinator they'd ever known. If someone like Teerlick had been fired, Dwight Freeney would have thrown a temper tandrem. If Tom Moore or Howard Mudd were ever fired, Peyton Manning might crash through Caldwell's office on Mudd's golf cart.

With Meeks and Purnell, the impression was these were not top quality coaches who were accountable. While Dungy was the type of guy who would nurture and help coaches like this along, Caldwell seems a little less tolerant of incompetence. Thus, Ron and Russ were sent packing.

With Ron and Russ gone, Jim Caldwell is forging ahead, looking for assistants that will actually add something to this organization. By talking to (and potentially hiring) Larry Coyer as the new defensive coordinator and Ray Rychleski as special teams coach, it signals Caldwell is looking for good teachers to coordinate two-thirds of his team's essential areas. And if someone like Herm Edwards is added into that fold, then the more the merrier.

I've been cautiously optimistic about Caldwell since we learned last year he would succeed Dungy. Now, I have to say that I am genuinely excited. While he retains many of Dungy's core virtues as a teacher and motivator, he has a very different take on things. And his message of accountability is a fresh addition to this organization. As we forge ahead to free agency and the draft, we will gain further insight into Caldwell's methodology. But for now, I'm impressed.

I think we got a find here.