So, who is running our team's defense?

Share All sharing options for: So, who is running our team's defense? 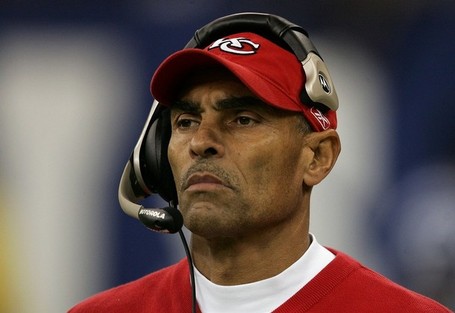 As of today (1/26/2009), the Colts still do not have a special team coach or a defensive coordinator. While WISH-TV News 8 did break the news the Colts have talked with Larry Coyer, the fact is no announcement has been made. Why? Don't know. Rumors said the Colts were waiting for Kansas City to hire Herm Edwards. Friday, they did that, but Herm stated (rather clearly) he does not want to be anyone's DC. He could come back to coaching as a DB coach, but that is up in the air.

There are lots of scenarios possible, and all of them seem to depend on certain things falling into place:

I'm now pretty convinced that the reason there has been no announcement on the open DC position is because of Herm Edwards. Herm has likely made up his mind by now, taking the weekend to discuss options with his family. In a perfect world, having all three coaches here in Indy only adds to the quality of the product on the field. Coyer and Edwards are well-respected teachers. Players play hard for them. Williams is a young assistant who may be ready for more responsibility.

It all hangs upon what Herm wants to do.

The special teams position is another open position that has only one candidate that we know of: Ray Rychleski. But, like Coyer, Rychleski has received no offer. And no announcement has been made. Are the Colts dangling special teams coach in front of Herm, or perhaps assistant head coach and special teams coordinator? Again, we've heard Herm's name far too much in rumor circles for it not to be at least an option for Indy.

Right now, Herm is the reason these two positions are not filled. Either today or tomorrow, we should see some movement on these fronts.