ESPN's own version of The Philadelphia Story has thrown a big, fat spotlight on the very dark and seedy state of their journalistic integrity these last nine months. Much of it stems from Sal Paolantonio, a hack of a sports writer who, the older he gets, more and more resembles the Marvel Comics villain Mole Man. You remember that cat, right? 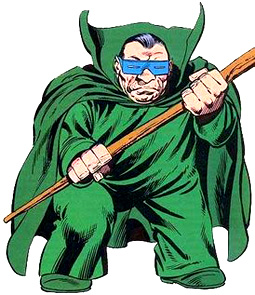 Indeed, since the incident outside Marvin Harrison's bar last May, which resulted in a convicted felon named Dwight Dixon getting shot in the hand, we've seen ESPN report all kinds of silliness, ranging from Marvin Harrison involved in a gang hit to Marvin being the guy who shot Dixon in the hand. The problem with all this reporting was there was no evidence that said or even suggested Marvin Harrison shot Dwight Dixon in the hand. The Philadelphia police investigated the incident and stated that Marvin Harrison was not a suspect in the shooting. After months of investigation, the Philly DA Lynne Abraham held a press conference saying the investigation was, essentially, over. The DA's office did not believe there was enough evidence to pursue charges against anyone.

In fact, at the press conference, the DA singled out ESPN's Sal Pal and seemed to make fun of him for his reporting on the incident. "Sorry Sal" were the words she used to start the press conference. The room chuckled. Likely, Sal of the Mole Men didn't. If anything, he probably seethed underneath.

The main reason the Philly DA Abraham would not pursue charges against anyone (including Harrison) was because the witnesses in the case, including Dixon, gave nine or so different variations of the incident. The DA concluded that because everyone was giving conflicting versions of the story, there were no credible witnesses, and no credible witnesses means no case. Thus, no charges. No arrests. No convictions. Nothing. Case is, essentially, closed. We all go home. That was on January 7th.

Then, for no reason whatsoever, ESPN ran a story a few days later highlighting that a second witness had come forward and supposedly corroborated Dixon's story: That Marvin Harrison was the person that shot Dixon in the hand after Dixon was tossed from Harrison's bar after causing a disturbance. The piece was written by Shaun Assael and Peter Keating, but I have my suspicion that Sal Pal of the Mole Men had a hand in it.

The problem with ESPN's "breaking" story is the "new" witness they reference, Robert Nixon, gave false or conflicting information to the police. He admitted he fabricated details to the police in his May 2nd statement. Now, he's saying Harrison's accidentally shot him and intentionally shot Dixon. ESPN has this information in their story:

In her news conference, Abraham cited problems with Nixon's recollection, saying he "admitted that he had fabricated many of the details" of his May 2 statement to police. The law enforcement source who has seen Nixon's second statement said that while elements of his story changed, Nixon's identification of Harrison remained consistent. The source added that Nixon spent two weeks in protective custody after giving police his second statement.

So, based on that, it seems this new, magical witness, Robert Nixon, is not credible. The Philly DA's office thought so, and by just by looking at that paragraph (in black and white and gray) it seems pretty obvious this guy isn't worth a bucket of piss when it comes to offering new or fresh information to a story.

That said, WHY THE F&$K DID THIS STORY RUN IN THE FIRST PLACE!

When the star of your piece, the key element to your assertion (that Dixon is telling the truth and was shot by Harrison) is proven to be a liar, how the hell can you run a piece with the title "Second Witness Points to Harrison" and expect it to be taken seriously? I mean, come on! Tabloids don't even stoop this low. At least they are honest in their bull crap, or at the very least, entertaining.

A few days after their "Second witness" story, Assael and Keating penned a scathing article which painted Harrison as a dark, brooding figure. Again, much of the information Assael and Keating used in their article was taken from accounts given by Dixon and Nixon.

The cherry on top of this sundae (or the egg in ESPN's face, whichever analogy you prefer) is that the supposed "victim" in all this, Dwight Dixon, was found guilty yesterday for... wait for it... lying to the police. After going back and reading all of ESPN's coverage of this silly farce, Harrison is painted as a gun wielding madman who hides his dark side under a veil of quiet dignity while the victim in all this is Dixon. The reality is Marvin Harrison isn't a suspect in any crime and hasn't been charged with anything, let alone convicted. The only person convicted of a crime in this whole dumb affair was Dixon, for lying to the police.

The same Dixon ESPN has painted as the victim.

So, with this new development, I expected that ESPN would do the honorable thing and post article about Dixon's conviction, and what it means for Harrison's reputation, on their website. I mean, with the gust and zeal at which they have reported on this story, you'd think they'd be all over Dixon's conviction for lying to the police (thus, destroying any and all credibility he has as a witness to the incident). I even decided to give it a day, because of the Super Bowl media coverage and all. Sadly, this morning, this was all there was on ESPN's NFL page: 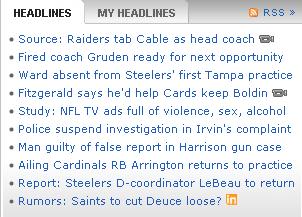 One, tiny little bulletin (fourth from the bottom). And it isn't even a story they wrote. It's just an AP story.

In the end, this incident has really exposed the sad, sorry state of ESPN's journalistic integrity. Recently, ESPN's ombudsman LeAnne Schrieber blasted the network for how they cover stories:

On at least four separate occasions in recent weeks, ESPN reporters, analysts and announcers became part of the stories they were covering, reinforcing the common perception that ESPN often draws more attention to itself than to the sports it covers.

She didn't cite the Harrison coverage in her teacher's scolding of Bristol, but she could have. Underlining the Harrison coverage are the attempts by Sal Pal of the Mole Men, Shaun Assael, and Peter Keating to push this thing even though all their primary sources are proven and convicted liars. In Sal Pal's case, even the Philly DA made fun of him for trying to make himself the story as he pretended he was Bob Woodward circa 1972.

The true victim here has been Marvin Harrison's reputation. Prior to ESPN's hack job, this guy was perceived as a great player who did what many NFL wide receivers don't do: Shut up and let their play do the talking. They took this model player and ran him through their manure factory, using this incident and highlighting silly incidents to add to their claim  that Harrison is some quietly dark, dastardly character; like his "assault" of a "ball boy" at the Meadowlands. Turns out this "ball boy" was a 23 year-old-man named Matt Prior. Prior, who handled the footballs at the Meadowlands back in 2003, tossed a football at Harrison. Marvin got angry and accused Prior of acting unprofessional. Prior confronted Harrison back, and then both men acted unprofessional by fighting. While not the highlight of Harrison's career, for a network that celebrates Buddy Ryan slugging a fellow assistant coach on the sidelines during a live game, or Nolan Ryan kicking the crap out of Robin Ventura on the pitcher's mound, Marvin Harrison having an altercation with a some ball handler certainly does not warrant the conclusion that he is a shady character.

This is a network that once employed Michael Irvin as an NFL analyst, a man involved in felony cocaine possession and a slew of assault allegations and arrests. And they have the nerve to paint Marvin Harrison as a "thug?"

Sadly, we will likely not see any formal apology from Sal Pal of the Mole Men, Shaun Assael, Peter Keating, or ESPN in general. The writers' employment won't be terminated. They probably won't even get a reprimand even though these hacks have the journalistic integrity of Baghdad Bob. The only satisfaction we fans can take in this is in the facts:

It's cold comfort, I know. But, the truth can sometimes be solice enough, even in the face of brutal, cowardly attacks from a mega corporate giant like ESPN. Stuff like this is a major reason why I don't watch ESPN anymore. I get my highlights from YouTube and other sites like NFL.com. I get my news from the net. I don't "need" ESPN, and after witnessing their work on this Harrison story, I don't really want them. They can take their SportsCenter highlights, Stew Scott's glass eye, and Chris Berman's sweaty, bald melon and stick it all right up their collective asses.

After this, the "World Wide Leader" can take a hike, as far as I'm concerned.