It didn't work out that way as Tamme was placed behind Gijon on the H-back depth chart and stuck behind Clark and Gijon again (though they would go 3 WR before asking Gijon to be Dallas) as the TE.

Tamme played 12 games, 9 of which were exclusively on special teams (he recorded 2 ST tackles and returned a kickoff 11 yards). In his 3 games working with the offense he caught 3 passes for 12 yards. 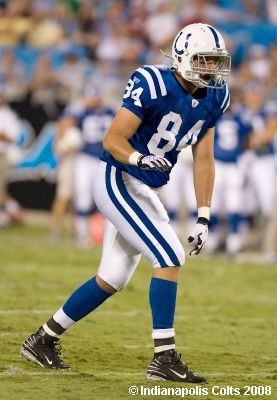 Tamme looked great early on, but we all forgot, ignored or wishful thought away that he was a 6'3" 236lb rookie TE. Despite his excellent preseason the bigger more experienced Gijon Robinson got the nod over Tamme. Tamme's knee injury that cost him a month (weeks 2-5) came at a unfortunate time. With Tamme out Santi played in all 3 games and was a part of the offense (putting up all his recieving stats in those 3 games).

Tamme has probably been locked into the Colts weightroom for the duration of the offseason. Hopefully by camp Tamme will be a strong enough blocker to push Gijon and Santi for the #2 TE spot. Either way he'll continue to be Clark's backup and understudy in the recieving game.