Dom not only escaped from the soul crushing pit of despair that is Oakland, he did it with his pockets stuffed full of Al Davis' money. 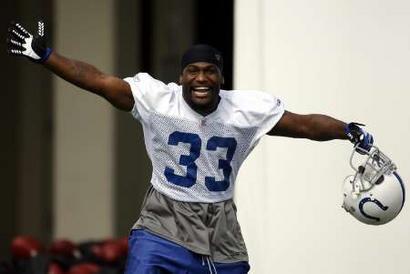 In a touching gesture the Colts OL taylored their blocking to match Oakland's easing Dom back into Indy.

Dom is a solid back. He can catch, he can block, he's a straight ahead runner who takes what the OL gives him. Dom is a jack of all trades, master of none. He's a great #2 back and can step into a 1b role, but he's not a top back for a good running game. Dom should be brought back if he's willing to take another cheap, slightly above veteran minimum deal. If Dom returns he should take enough carries to keep Addai healthy, but he's not the better back. 30-40% of the carries.