It was pretty obvious that the 2008 season featured some of the worst officiating in recent memory. From Ed Hochuli's blowing the call on the Jay Cutler fumble in Week 2 to Ron Winter's crew embarrassing the NFL in OT by handing first downs to the Chargers; all around, a horrible officiating year. I focus on officials today because, some five days after the Colts lost to the Chargers, media are still complaining about Ron Winter's crew and how the called the OT period.

For the Colts in particular, officials have really screwed them out of a couple of victories this year. Against the Jaguars in Week 3, Freddie Keiaho was called for a bogus pass interference call that helped the Jaguars win in Indy. Now, after the fallout of the Chargers loss, I think it is pretty safe to say the Colts were screwed by the refs this year.

Look, I have no problem with Winter and his crew calling the Clint Session facemask, the Eric Foster hold, or the Tim Jennings hold in OT. No problem at all. However, that kind of stuff was going on ALL. NIGHT. LONG. And much of the facemasking and holding was being done by the Chargers. Even PhilB saw it. On the now infamous 3rd and 2, Dallas Clark was held. Manning had to pull down the ball, and the result was a sack. Holding like this was routine for the Chargers. Yet, for the game, they had 3 flags called against them.

And if Winters is going to call the Clint Session facemask (which was a correct call, imho), then he should have thrown the flag on #61 of the Chargers. Why? Because he was grabbing Clint's facemask as well. 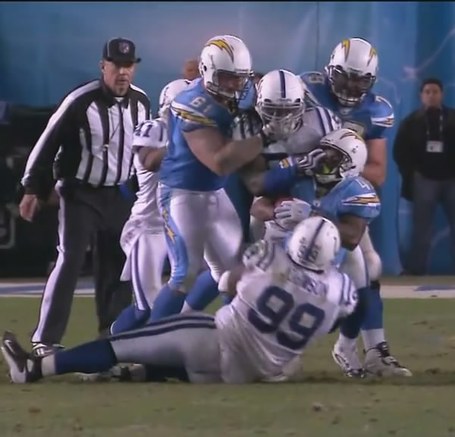 As you can see, either no flag should have been thrown, or two facemask penalties thrown, and have them off-set.

And while we are on the subject of facemask, Chargers offensive linemen where grabbing and pulling on Dwight Freeney's all night. They couldn't block him. So, they did anything and everything to slow him down. Sadly, the refs decided to be selective with enforcing the rules: 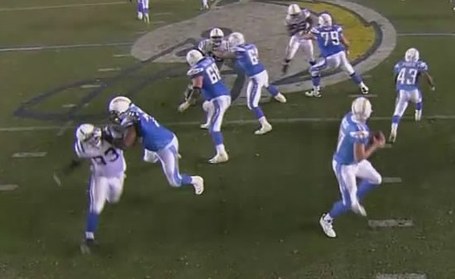 Under the new NFL rules, that's a 15 yard facemask right there. Sadly, no call. in fact, no calls all night long. Ron Winter = douchebag

The Jennings hold is the one Winters and the NFL are getting roasted on, but as you can see there were plenty of blown calls all throughout the game.

Listen, I have absolutely no problem with refs calling penalties like the ones Winters and his crew called in OT. Holding is holding, whether in the first minute of a game, or in OT. My beef is the refs were not calling these things all evening. Then in OT, for seemingly no reason whatever, they are throwing flags.

The answer is simple: The NFL and NBC wanted the game over with. The game was approaching midnight Eastern time, and if San Diego hadn't won it on the first drive, NBC would have had to shell out more money to continue broadcasting the game. It would have likely meant free commercial time, and additional pay for the TV crew. So, Winters and his gang decided to, essentially, end the game by throwing flags. I have no proof that this was the reasoning. It is the only logical sense I can make out of Winters deciding to get flag happy in OT.

Where the calls legit? Yes. Where they appropriate? Absolutely not. This isn't about calling the game correctly. This was about: 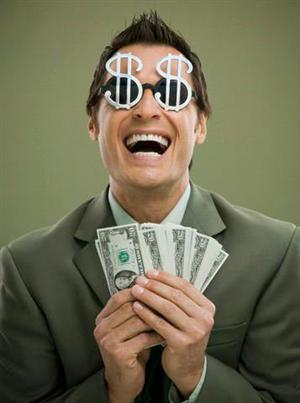 By the way, this game was officiated by the same Ron Winters who was banned from officiating Giants games for his screw-up in the 2003 playoffs. Why this asshead is still officiating, let alone still officiating playoff games, I don't know.

I don't blame the rules for the Colts losing in OT to the Chargers. I don't blame the OT rules or the way the NFL does "sudden death "scoring. What I do blame is incompetence and plain and simple greed. That, I blame. And that's what happened here. I simply cannot help but feel my team got hosed. I cannot remember any other game where the refs did such a screw job to a team our guys were facing.

I guess the game was good in that it highlighted the incompetence of several NFL refs. Mike Pereira has tried all season to explain his officials' screw-ups, and just like every other week, he comes off looking like a douche when explaining the abortion that was the Colts v. Chargers game. The league needs to ditch these lawyers who do this as a part-time job and hire real, professional referees who do this year round.

I don't want to take anything away from the Chargers. They played well enough to win. But, then again, so did the Colts. The difference was the officiating. And that really, really sucks.

[UPDATE] This is from an article by Rick Gosselin, one of the more respected national media writers out there. He wrote this back on December 16th:

How do the officials speed up games, you ask? Simple: Don't call penalties. Keep those yellow hankies in your pocket. Thirteen of the 16 games last weekend had 10 penalties or fewer assessed, another season low. Five teams were flagged for a single penalty.

Gosselin goes on to say that Winter and his crew threw the most flags of any group of officials in the league. Prior to overtime against the Chargers, only nine penalties were called in four quarters of play. In overtime, with the prime time game spilling over past three hours, Winters and his crew threw three flags. Each flag thrown awarded SD with a new set of downs, with two thrown on key 3rd down plays. These flags kept SD's drive going, and ultimately helped them win.

Again, I'm not writing this to churn up some "grand conspiracy." This isn't a conspiracy at all. Al NFL people know that refs do things to end games. I just don't think they feel comfortable letting the fans know this, even though it happens pretty regularly.

Also, Dwight Freeney was pissed as hell at the officiating. Yahoo's Mike Silver thinks he has a point:

As one of the NFL’s best pass rushers of his generation, the Colts’ Dwight Freeney believes that he is held by opposing pass blockers "every single damn play." Let that serve as a backdrop to the utter disgust the Pro Bowl defensive end displayed as we walked to Indy’s team bus outside Qualcomm on Saturday night over the trio of penalties called against the Colts’ defense that helped facilitate San Diego’s winning touchdown drive in overtime. The rundown: Second-and-4 from the San Diego 43 – Sproles is stopped for no gain, but Eric Foster is called for defensive holding. Third-and-8 from the Indy 40 – Rivers throws incomplete to Chris Chambers, but cornerback Tim Jennings, who helped break up the pass, is called for defensive holding. Next play, first-and-10 at the Colts’ 35 – Sproles is stopped for no gain, but Session, who made the tackle, is whistled for a 15-yard facemask penalty. In my opinion it could be argued that any of the three penalties was justified, and a case could be made that each was unwarranted. But to have all three of them called in that context was regrettable, and the fact that the Chargers were only penalized three times all game (and only once on offense, for an ineligible man downfield) makes it even worse. In Freeney’s opinion, the flurry of calls that helped end his season was flat-out unconscionable. "Those were the worst [expletive] calls I’ve seen in a long time," he said. "To have a game of that magnitude taken out of your hands, it’s just disgusting. It’s not like they made one [expletive] bad call – it’s three calls, in overtime. On one the ball’s 50 feet over [Chambers’] head. And they have the nerve to call defensive holding? When they can’t even call one friggin’ offensive holding the whole game? What’s going on? They need to start investigating some other [expletive]."