Najeh Davenport is a 3rd down back trapped in a fullbacks body. He's not a good runner, and is nowhere near as powerful as a back his size should be, but he can catch and moves surprisingly fast in his routes out of the backfield.

Deuce returned kicks about as well as you would expect from a 250lb back off the wavier wire. 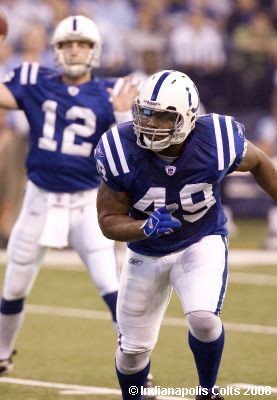 Deuce was an injury replacement. With the Colts top 4 runningbacks injured, ranging from banged up (Dom) to IR'ed (Hart) and the Colts top kickoff returners unavailable (Rushing-IR'ed, Simpson-bad ankle, Garcon-personal issue) they "solved" both problems at once with Davenport. Najeh turns 30 in a month, he's not getting better and he wasn't good this year.

Deuce was cut before the Chargers game

It will take another injury wave to both the RBs and KRs to bring him back.