While blocking his man in the first quarter on a punt return, much maligned Colts cornerback Tim Jennings was doing everything he could to contain the Titans gunner he was assigned to block. Jennings entered the game on thin ice already, it seemed. Having been the primary back-up to Kelvin Hayden and starting in three games at cornerback already this season, Jennings was benched to start the game in favor of a rookie free agent, Jacob Lacey. For the past few weeks, opposing QBs had been picking on Jennings, known for playing too soft in coverage by providing WRs with too much cushion off the line of scrimmage.

While engaged with the gunner on the punt, Jennings (who did not know where the ball was) heard the call for "short punt." This meant the ball was kicked shorter than everyone anticipated, and that it was likely the ball was in his vicinity. But the call was too late for Jennings to disengage from his blocker and get out of the way. Instead, Jennings bumped into Colts return man T.J. Rushing, causing him to muff the punt, which was recovered by the Titans on the Colts 34 yard line.

Despite the Colts building an early 7-0 lead off an Alge Crumpler fumble that was converted into a Peyton Manning to Reggie Wayne touchdown, early miscues and mistakes, like Jennings bumping into Rushing on the early punt return, kept the Titans in the game. While the continued stellar play of Peyton Manning (81% completion, 309 yards, 3 TDs) will likely generate all the headlines around Yahoo, CBS Sports, ESPN, and likely Peter King's Monday morning opus, it was really the play of the Colts defense that mainly helped Indy win its fourteenth straight regular season game, dating back to October of last year.

Despite the early miscues with turnovers, penalties, and sloppy play on offense and special teams, it was the defense that played hard, tough, inspired football. They harassed Titans quarterback Kerry Collins all night, and completely and utterly stoned dynamic running back Chris Johnson (9 carries, 34 yards).

And, at the end of the night, as the Colts walked off the field with a three game lead in their division as they head into a bye week, one of the big heroes of that defensive effort was none other than Tim Jennings. More after the jump...

Again, most of the "morning after" press will praise Peyton, claiming his efforts alone were the reason this team blew out the Titans for the second time in as many meetings. Yes, Manning was Manning, which is to say he continues to re-write the definition of greatness as a quarterback and continues to make bumbling buffoons like NBC announcer Chris Collinsworth sound like nothing more than blathering ear noise.

During the fourth quarter, Collinsworth made the claim that before anyone can start calling Peyton Manning as good or better than Tom Brady, Joe Montana, Dan Marino, or Sammy Baugh, Peyton had to win "multiple championships." Considering that Manning's statistics absolutely shatter all four of those men save Marino (who never played on a Super Bowl championship team), it pretty much shows you that NBC went from one idiot blabbermouth (John Madden) to another this year when John Madden returned and was replaced by the fumble prone choker at wide receiver who likes his girls young and extremely stupid.

Peyton Manning is better than all those players right now. It's obvious, and most people agree. Those that don't simply don't know anything about football, and are likely the same sad idiots who once claimed Peyton "couldn't win the big one." I now understand why Peyton watches football games on mute. After another Sunday listening to idiots like Gus Johnson, Joe Buck, and Chris Collinsworth try everything they can to focus attention away from the action on the field and onto them, it is becoming near impossible to watch games and listen to these self-important morons in the booth. 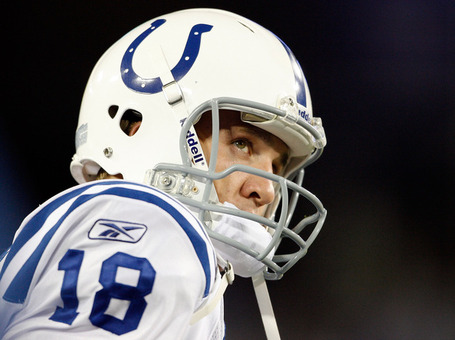 Back to the game, Manning's 309 yards and amazing accuracy in the face of a very aggressive Titans pass rush were big reasons why the Colts essentially ended the Titans season, but it was not the reason. For the third week in a row, the Colts defense dominated an opponent's offense, and they are doing so by completely shutting down the opponent's run game. The Titans ran for 90 yards on 21 carries, but even that stat is skewed. 20 of those yards came in garbage time, with 6 minutes left in the game and the score 31-9. Prior to that, Tennessee had 62 yards on 17 carries.

For three weeks, the Colts have held an opponent under 100 yards rushing. This time, it was (arguably) the best back in football that was held in check: Chris Johnson. Johnson entered the game averaging 6 yards a carry and leading the league with over 400 yards rushing. Last night, a relentless Colts defense limited him to 3.8 a carry, preventing him from getting outside the tackles and into open space, where Johnson is so very good at making defenders miss.

With Johnson neutralized, the unfair burden fell on veteran quarterback Kerry Collins to dig the Titans out of an early hole. However, despite early Colts miscues (like Jennings' mistake on special teams) giving the ball to the Titans in Colts territory, Collins was unable to get his offense into the red zone. It's fair to say that the fault was not Collins', though already many Titans fans are screaming for Vince Young to regain his starting job. Collins had to contend with a fierce Colts pass rush, turnovers by his receivers (Crumpler), and some outstanding coverage by the Colts secondary.

The conventional feeling is that the game essentially "ended" when, about one minute prior to halftime, Peyton Manning drove the Colts offense 93 yards in 57 seconds, capping the drive with a 39 yard TD pass to rookie wide receiver Austin Collie, who continues to remind so many of us of a young Brandon Stokley. The TD was made with 17 seconds left in the half, giving the Colts a 21-9 lead and seemingly breaking the will of the Titans. During the drive, the Titans were called for three roughing the passer penalties, one of which involved Kyle Vanden Bosch violating "The Brady Rule" and attempting to tackle Manning's knees. The play gave Indy a first down after starting on their own seven yard line. 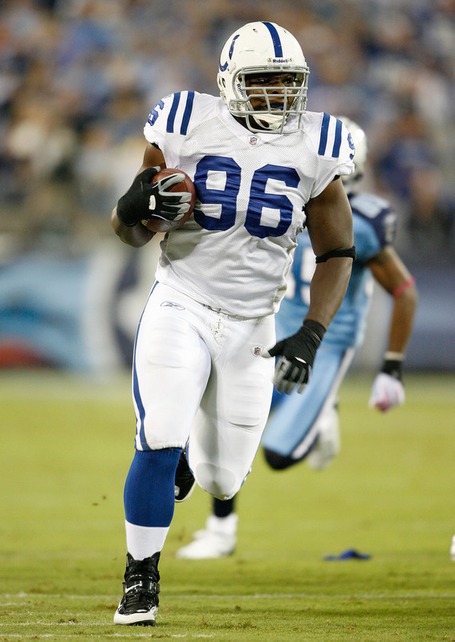 NASHVILLE, TN - OCTOBER 11: Keyunta Dawson #96 of the Indianapolis Colts runs with the ball after intercepting a pass during the NFL game against the Tennessee Titans at LP Field on October 11, 2009 in Nashville, Tennessee. (Photo by Andy Lyons/Getty Images)

But while the TD before the half was indeed a crucial play, it was not the play that, essentially, called it a night for the Titans. That play belonging to none other than Tim Jennings.

The Titans got the ball to start the half, and it almost goes without saying that if they had scored on the opening drive of the second half, this game would have gone much differently. However, on a third and 6 on the Titans 24 yard line, Collins slung a quick out to wide receiver Nate Washington. Covering Washington at the time was Tim Jennings. This play was the sort of typical pattern that receivers had been killing Jennings with for weeks now. Jennings would provide too much cushion, the receiver would come back to the football, and the result was usually a first down.

Last night, ole Tim would have none of it.

When the ball hit near Washington, Jennings was right there with him, and fought for the football as if he were a hungry man and the ball was the last loaf of bread on Earth. When both players hit the ground, Jennings had firm control of the pigskin, and the Colts had created yet another Titans turnover in their territory. The Colts offense took over, and Manning hit Collie again for a touchdown, this one from 6 yards out.

Later in the contest, the Colts would tack on an Adam Vinatieri chip shot to pad the lead, but for all intents and purposes, this game ended with Tim Jennings' magnificent interception. For you "old timers" out there, it reminded me of one-time Colts (and current Titans) corner Nick Harper fighting the football away from Derrick Mason in the endzone back in 2004.

Jennings' INT capped off one of his better games as a Colt. Despite the early game miscue, Jennings seemed all over the field on special teams, making tackles left and right and preventing the Titans from mounting any kind of comeback. It was actually quite inspiring to see Jennings rise up and play this way. The key for him moving forward is to play this way consistently, but for one night, Jennings was brilliant.

We have the rest of the day to talk about the bad elements of this game (aka, Tony Ugoh), but for this recap, I think we should focus on the many positives. This team is 5-0 heading into the bye week. They have managed to do this without Bob Sanders, Anthony Gonzalez, and Kelvin Hayden for much of the season. All those players are expected back after the bye. We've seen young players like Austin Collie mature quickly and we've seen maligned veterans like Tim Jennings rise up and play the way we all know they can play.

This is a talented, tough, no-quit team that seems to reflect the convictions of their head coach, Jim Caldwell. I cannot say enough good things about how well Caldwell managed this game. From the decision to go for it early on fourth and goal to starting Jacob Lacey at corner, Caldwell outcoached Jeff Fisher. That is no small feat.

As always, thanks to Jimmy and the Music City Miracles crew for some excellent blogging leading up to the game. You can read their game recap here.

For two weeks, we get to enjoy being undefeated. Take it in and soak it up, because last year this time, our guys were 3-4 and looking like a bunch of bums. Fourteen straight regular season wins later, these guys look like something special.