Your turn! Vote for a Colts player to get into the NFL Hall of Fame Class of 2010

Share All sharing options for: Your turn! Vote for a Colts player to get into the NFL Hall of Fame Class of 2010

A longtime former Colts player is up for consideration for the Pro Football Hall of Fame in Canton, OH.

Yes, that's right. The big place with all the metal busts (which apparently talk to each other at night, according to John Madden) is considering several major candidates this year. Players like Jerry Rice and Emmit Smith are sure to be first ballot selections.

But what about players like former-Colts center Ray Donaldson?

Donaldson played for the Colts from 1980-1992. He was drafted for the Baltimore Colts, and moved with the team to Indianapolis in 1984. For many years, he was regarded as a high caliber offensive lineman on a low caliber team. Before the emergence of Jeff Saturday, Ray Donaldson was arguably the best center in recent Colts history. He was second team all conference five times in his career, Pro Football Weekly's 1st Team All-Conference center in 1988, and Associated Press second-team All-NFL in 1987, the first year the Indianapolis Colts made the playoffs. After he left the Colts, he played two seasons for the Seattle Seahawks and two for the Dallas Cowboys. In 1995, he was the starting center for their Super Bowl championship team, blocking up-front for Emmit Smith and Troy Aikman. In 2006, he was inducted into the Georgia Sports Hall of Fame. He also one of 18to88's Classic Colts players.

Donaldson retired following the 1996 season after seventeen years as a starting NFL center (wow!). He's been eligible for the Hall for a number of years, and I think it is time we fans let the Hall know that if you are going to let someone like Michael Irvin in there, then a true tough guy like Ray Donaldson deserves a bust in Canton as well.

Ray deserves better than that.

So, in my not-so-humble opinion, I think it is time we give good ole Ray some love, and let the Hall of Fame voters know that players like him deserve credit for the impressive careers they forged in the NFL. 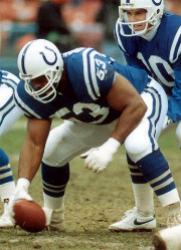 More about the Promotion --

The Pro Football Hall of Fame has teamed up with Van Heusen in search of the Fan's Choice for the class of 2010.  This season long campaign empowers fans and provides them with the environment to:

Although the fans vote does not count toward the official selection, the Hall will hear what the fans have to say and the Fan's Choice will be revealed on the NFL Network on February 6, 2010 in Miami.

Other former Colts listed as candidates are linebacker Cornelius Bennett (1999-2000) and Richard Dent (1996). While these men also deserve Hall of Fame consideration, they have not been eligible for the length of time Ray Donaldson has. and since Donaldson had such an impressive 16 year career, I think we Colts fans need to push him up that list a little bit.

So, please go to the Van Huesen Fan's Choice site and vote for Ray! I'd very much like to see him finally get a little credit for being such a great Colts player.